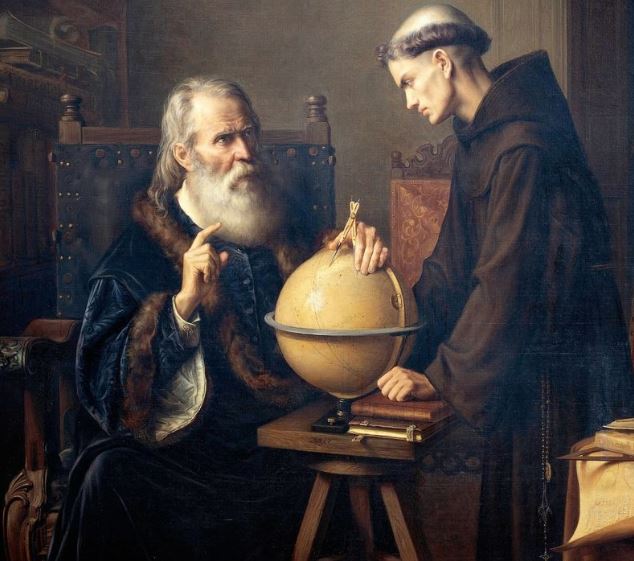 Galileo Galilei as teacher at the university of Padua.  Picture Credit: Wikipedia

In 1899 Fernando Sanford, Professor of Physics at Stanford who died in 1948, made the statement in his commencement speech that three hundred years ago, for the first time in history, two great experimental scientists, Gilbert and Galileo, had set forth the basics of modern science:

For the last 5 years, all these research principles have become the subject of AI engagement, for example in medical-, material-, or biological-sciences to name just a few. This process is accelerating as AI algorithms and machine learning combined with ever more powerful computing and storage facilities are accelerating global research in a highly competitive environment. This trend has an impact on how research is conducted and how the results of this research are converted to new products and services. While corporations must assess which innovations could disrupt their business model, research und educational institutions will have to review their traditional structures and methods to avoid their own disruption and implosion. Digital transformation, also dubbed as Industry 4.0, is now in full swing. However, AI transformation is just at the beginning, raising many societal and individual issues such as the replacement of human researchers with intelligent machines. One challenge for business and technology leaders is to create services and workflows where people and machines complement each other. The process of ‘Design Thinking’ plays an important role when companies create AI supported systems, because this methodology helps to consider the end user’s perspective and reveals how people will use the system. The same principles apply as research organisations adapt to the potential benefits of AI.

Today’s application of AI commonly works by starting with massive data sets, from which it figures out its own strategies to solve a problem or make a prediction—rather than to rely on humans explicitly programming the method of reaching a conclusion. Realizing the full potential of AI requires long-term vision. Millions of years of evolution have created molecular machines capable of countless functions and survival in challenging environments. Scientists have long sought to harness these design skills and decode nature’s blueprints to build custom proteins of their own for applications in medicine, energy production, environmental protection and more. But only recently have the computational and biochemical technologies needed to create this pipeline become reality. The use of computers to aid scientific research goes back about 75 years, however the method of manually poring over data in search of meaningful patterns originated hundreds of years earlier. Many scientists argue that the latest techniques in machine learning and AI represent a fundamentally new definition of scientific research. One such approach, known as generative modelling, can help identify the most plausible theory among competing explanations for observational data, based solely on the data without any preprogramed knowledge of what physical processes might be at work in the system under study. “It is basically a third approach, between observation and simulation,” says Kevin Schawinski, an astrophysicist and former professor at the ETH Zurich. Could it be possible, in the foreseeable future, to build a machine that can discover aspects of physics or mathematics that the brightest humans alive are not able to do with their own biological intelligence? Perhaps most controversial is the question of how much information can be deducted from data alone. In ‘The Book of Why (2018)’, the computer scientist Judea Pearl and the science writer Dana Mackenzie assert that questions about causality and creativity can never be answered from data alone. “

New Concepts to accelerate the transition from Research to Product-Development

There is hardly disagreement that AI is adding value to research across many scientific areas. What becomes increasingly evident, however, is the fact that the acceleration of this transformation has an impact on the transition between fundamental research and its application in product- and service development. Established procedures, defined by traditional university structures, need to be reviewed and changed. The following describes two initiatives designed to speed-up the transition process including an interdisciplinary approach to avoid silo-building:

The Wyss Zurich Model (ETH and University of Zurich)

Switzerland holds a leading position globally in basic research, but there is a long latency period between scientific discovery and its widespread application. Many scientific research discoveries do not get translated into practical applications because industry/investors typically prefer to invest in riper technologies. Due to lack of funding, early stage developments get stuck in what is called the “Valley of Death”. Swiss entrepreneur and philanthropist Dr. h.c. mult. Hansjörg Wyss wants to change this: “Breakthrough discoveries in medical and technological fields have to be made available as soon as possible for the benefit of mankind,” he says. “I want to help accelerate the translation process and build a bridge between basic research and application.” To attain this goal, Hansjörg Wyss asked ETH Zurich and the University of Zurich to join forces and made a USD 120 million donation in December 2014 to launch the joint Wyss Zurich accelerator. It was established to foster translational research focused on developing treatment protocols and clinical therapies, as well as novel technologies and intelligent systems, in the emerging fields of Regenerative Medicine and Robotics as well as hybrid technologies thereof.

MIT’s vision for the Quest for Intelligence

As part of its mission, MIT Quest is developing customized AI tools for non-AI researchers, which could accelerate progress in many fields. It sees an opportunity to achieve a deeper understanding of intelligence through the kind of basic research that leads to unexpected breakthroughs. We have access to more information than ever before, but the tools for making sense of it require a giant leap forward. MIT Quest brings together more than 200 investigators working on the science and engineering of intelligence. In uniting these researchers with ideas and expertise from biology, chemistry, physics, math, design, economics, and the humanities, MIT Quest is sparking collaborations that will impact health care, finance, the environment, policy, and beyond. The research and development concepts are structured along the following lines:

MIT Quest is supported by private donations starting at USD 150’000. More recently IBM has agreed to invest USD 240 million over 10 years to establish the MIT-IBM Watson AI Lab, a founding sponsor of MIT’s Quest for Intelligence.

In a major study conducted by the publishing and analytics company Elsevier, changes in the funding scenarios of scientific research were investigated and the key drivers of change were identified as follows:

Market-dominating high-tech companies are entering joint-ventures with top-rated universities to gain access to the most talented students. In Zurich for example, Google, Amazon, Facebook, Microsoft, Disney and Apple maintain research labs with close ties to the ETH and the University, competing for the best talents. As the products and services developed by these labs are marketed globally under the ownership of their parent companies, the question can be raised how Switzerland can recover the significant cost of public education and research when profits are made outside of Switzerland.

Compared to other countries, Switzerland has an extremely innovative and competitive economy. One of the reasons for this is the fact that great importance is given to education and research. Education expenditure accounts for about 5% of Swiss GDP (value of gross domestic production), slightly below the OECD average of 5.2%. Government funded research and development (R&D) activities account for a further 3.4% of Swiss GDP, amounting to CHF 5.4 billion per year. Privately-owned companies invest heavily in R&D: currently around CHF 14 billion per year. In combination with public research expenditure, which is mainly intended to promote basic research, Switzerland in total spends about CHF 20 billion per year in R&D which amounts to a whopping 30% of Swiss GDP. This is one important factor why Switzerland enjoys an extraordinarily solid reputation as a location for knowledge and innovation.

As the application and globalization of AI is rapidly changing the R&D landscape, it will be essential that Switzerland adapts and takes advantage of this trend to maintain its position as one of the wealthiest nations with the highest standard of living. This can only be accomplished if the value generated by AI supported R&D is translated to income generated by Swiss products and services.