The initiator/mentor behind the Project ‘Singularity 2030’

The idea to create and realize the Project ‘Singularity 2030’ is the ‘brainchild’ of Peter Rudin. With a background in Engineering (Dipl. Ing. ETH) and Industrial Psychology (I.E. Columbia University N.Y.), Peter can look back to a long successful career as entrepreneur and board member, particularly in visionary Start-Up settings.  His visionary talent and entrepreneurial drive to move ideas to reality such as the launch of Swisscom’s Bluewin internet service was always the success of his team. He followed intuitively a mindset of ‘Emotional Intelligence’ long before it became a topic in leadership theory. 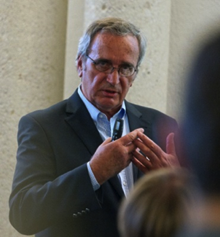 At the University of Bern

His interest in Artificial Intelligence led to the conceptual design of an unmanned vehicle as robot for precision farming applications. To understand the complexity of these applications, Peter got an education in farming and worked as a research practitioner at Agroscope, the Swiss Governments research organization.

Since 2 years Peter is strongly inspired by the progress in brain research and its impact on Cognitive Neuroscience as well as Cognitive Computing. The project ‘Singularity 2030’ is the result of his ongoing studies. It supports his desire to share and communicate his findings to raise the awareness of Singularity and its impact to the tasks of transformational leaders and their organizations.

To provide a legal framework, Peter employs his company Newtrac AG in CH-6045 Meggen to handle any regulatory, contractual or financial issues. The project is idealistically driven and not profit oriented. Any income from the Services offered is applied to the cost of running the website and the production of content.