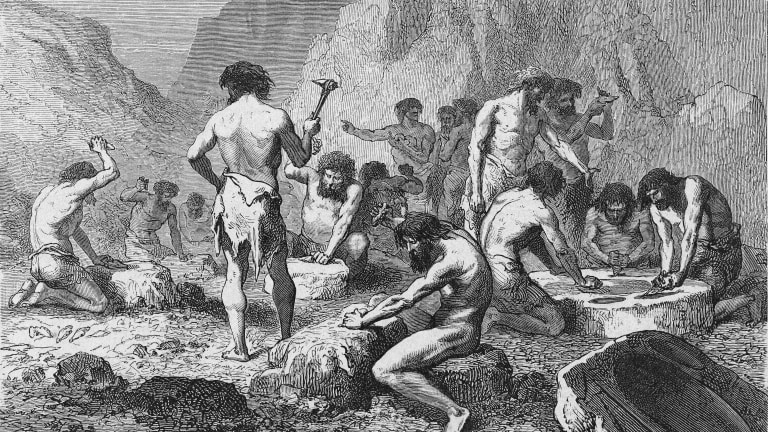 Discussing the consequences of AI, many reports and media-releases speculate about the loss of jobs as process automation will cut into every business sector on a global scale. The anticipated losses are the result of manufacturing jobs being replaced by AI-operated robots or analytical jobs being lost to AI-based data analytics. Taking various studies into account, estimates are that about 1/3 of today’s jobs will vanish during the next 10 years. This staggering number causes widespread concern and existential fear. What advantages do humans have over AI-machines? Where can humans add value as we continue to employ AI in all facets of life? Many experts consider Creativity a human asset which cannot be replaced by AI-machines. The following discussion supports this view.

According to Wikipedia, Creativity is a phenomenon whereby something new and somehow valuable is formed. The created item may be intangible (such as an idea, a scientific theory, a musical composition, or a joke) or a physical object (such as an invention, a literary work, or a painting).

The potential relationship between creativity and intelligence has been of interest since the late 1900s, when a multitude of influential studies focused not only on creativity, but also on intelligence.

Sternberg and O’Hara proposed a framework of possible relationships between creativity and intelligence such as: a) Creativity is a subset of Intelligence, b) Intelligence is a subset of Creativity and c) Creativity and Intelligence are overlapping constructs. Another well-known contribution to the issues of Creativity was originally published in 1983 by Teresa Amabile, Professor at Harvard Business School. Articulating a ‘Componential theory of Creativity’, her work was designed to be comprehensively useful for both psychological and organizational creativity research. Two important assumptions underlie her theory. First, there is a continuum from low, ordinary levels of Creativity found in everyday life to the highest levels of Creativity found in historically significant inventions, performances, scientific discoveries, and works of art. The second, related underlying assumption is that there are degrees of Creativity in the work of any single individual. Besides these contemporary studies, one challenging approach is to go way back in history to discover how Creativity came about and what the motives of humans were to apply Creativity in their daily activities.

The burst of Creativity about 40’000 years ago

There is an emerging consensus that Homo sapiens first appeared some 100’000 years ago in Southern Africa. There is evidence as well that this species was of basically modern intelligence, accumulating knowledge concerning its environment and capable of producing important tools for survival. However, Homo sapiens at that time was crucially lacking in creative imagination. Although the function of wooden artefacts may have undergone some change and bone tools were introduced for the first time, essentially the same range of stone tools as had been employed by later sub-species of Homo erectus continued to be used unchanged for tens of thousands of years. There was no sign of the production of art until Creativity ‘burst’ onto the scene together with the invention of new stone-tools some 40’000 years ago. So far, as we can tell from archaeological records, this upsurge in human creativity occurred more-or-less simultaneously around the world (give-or-take 10,000 years). It looks as if we shall either have to claim that human creativity resulted from a series of gradual cognitive/cultural accumulations, independent of genetic change and built up independently by different human communities over many millennia; or we shall need to claim that some change occurred in the human genotype which could be caused by the nature of the ecological environment. So far there is no generally accepted answer and the mystery remains. We know however, that starting about 40’000 years ago – when humans had to hunt to survive, sheltering in caves and moving on if the food source disappeared – they had a strong drive to create. One of the most spectacular caves in the Dordogne region of southwestern France, home to some of the most well-preserved cave paintings in the world, shows a bison created by a human, drawn in simple, confident lines that reveal startling artistic talent.

Why did early humans create art?

But why did these early humans create art? What was the purpose? To a large extent, we still don’t really know, but a look at the psychology of Creativity may shed some light on these early cultural practices that helped define the evolution of humanity. In a scientific paper on the evolution of human artistic creativity, Oxford University professor Gillian Morriss-Kay writes: “Creating visual art is one of the defining characteristics of the human species, but the paucity of archaeological evidence means that we have limited information on the origin and evolution of this aspect of human culture.” He believes that the genesis of this creative capacity began with adaptive changes to the visual system that lead to recognition of familiar forms (such as humans or the animals they hunted) in other physical objects like rocks. With these new forms of imagery came the desire to communicate such discoveries to others. Victor Shamas, a psychologist from the University of Arizona and author of ‘Deep Creativity: Inside the Creative Mystery’, has spent thirty years studying the creative process and what it feels like to create, to try to understand why we do it and why we have done it for tens of thousands of years. “We are drawn to Creativity because it expands us, allowing us to know more, feel more, and be more. In order to create at such a great expense, working for weeks and months with little light or oxygen in a dark cave, there must have been a strong intrinsic motivation. That’s the kind of motivation that comes from within, that represents the pure enjoyment and personal value derived from making art”, Shamas explains.

The ‘burst’ of Creativity in art also produced a ‘burst’ of Creativity and innovation in tool-making. We can see the first archaeological evidence of tools with a heavy dependence on compound tools, such as intentionally detachable harpoon points and interchangeable spear foreshafts of hard wood attached to spears.  Compound tools have the advantage that they can be repaired.  When a part breaks, it can be replaced rather than replacing the entire tool. This was a giant intellectual leap forward.  This extraordinary advancements in tool-design and art created the necessary environment for social innovations to occur. From the time of the earliest humans 2.5 million years ago until around 40,000 years ago, the global human population experienced only very modest growth.  People evidently lived in small hunting, gathering, and scavenging bands that rarely exceeded a few dozen individuals.  Life expectancy was typically 30 years or less. Then within a few 1000 years, following this ‘burst’ of Creativity, there was a sharp rise in the number of people who were over 30 years of age, providing a new environment for social development and wellbeing.

The left-brain vs. right-brain debate

Through evolution, Creativity has become an intrinsic part of humanity. Art-production as part of our emotional sphere and tool-making as part of our logical sphere continued to advance our wellbeing despite serious life-threatening setbacks as they have occurred over thousands of years. According to conventional wisdom, people tend to have a personality or way of doing things that is either right-brained or left-brained. Those who are right-brained are supposed to be intuitive and emotional. Left-brained people tend to be more quantitative and analytical. These notions of ‘left- and right- brain-ness’ are widespread, but they may also be wrong. We still do not know much about what determines individual personality; but it seems unlikely that it is the dominance of one side of the brain or the other that matters. A study of Albert Einstein’s brain, released in 2013, found that his unique brilliance may be linked to the fact that his left- and right-brain hemispheres were extremely well-connected. The ability to use right-brain emotionality and left-brain logic simultaneously may have been what made Einstein a genius. Apart from being one of the worlds greatest physicists, he also was a master violinist.

AI is a tool invented by humans which can augment our lives both emotionally as well as logically. AI-machines can produce art or new products beyond our existing mindset of reality. However, AI-machines have no intrinsic capability to sustain Creativity without incorporating human values and adherence to the laws of natural sciences. As innovative tools and art were introduced about 40’000 years ago, evolution of mankind, up to the present, still follows the same basic principles as depicted by the following chart: 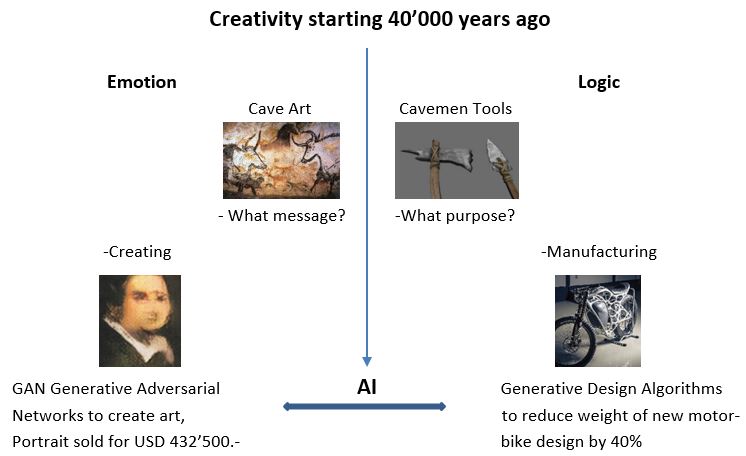 Creativity is the origin and a catalyst for human evolution. AI provides a new tool-set to enhance innovation at a level never experienced before. What we must keep in mind is that the interaction of live sciences and natural sciences is a prerequisite for Creativity. This fact needs to be addressed by the governing rules of our democratic society, particularly in respect to economics and education.