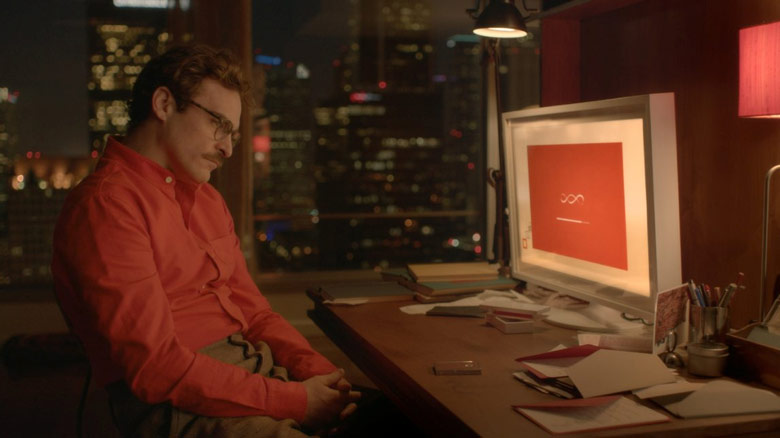 Scene from the 2013 film Her: the lead character falls in love with his virtual assistant, a charming, operating system voiced by  the actress Scarlett Johansson.

The race is on among the big tech companies like Google, Microsoft, Apple, Microsoft  and Amazon to become the preferred supplier of your VPA. Who controls the VPA gateway will greatly influence  the relationship to all services a customer might want.

“It’s really a meta-layer of machine intelligence that’s sitting on top of all the services,” says Mitch Lasky, a partner at Silicon Valley venture capital firm Benchmark  and an investor in mobile software company Cyanogen.

The drivers behind this development are ongoing advances in machine learning  including deep learning in combination with increased computer performance in neural networks  as well as new software  techniques such as dynamic programming.  The enormous effort by  the neuroscience community to develop a computational model of the human brain provides a powerful catalyst that will soon reshape  the internet landscape.

One key in this development towards a VPA  is the application of machine learning to language comprehension both in respect to content and context  and the support of voice assistants to provide the interface to language oriented services.

Like the browser wars of the 1990s, the outcome will lead to settling the balance of power in the next phase of the internet. By channeling attention and making decisions on behalf of their users, VPAs will have a significant impact to make or break many other businesses already engaged in providing internet services. Many companies — from carmakers to entertainment concerns — aim to develop voice-powered assistants of their own to keep their customers loyal. But the future may belong instead to a handful of all-knowing assistants. Google’s search engine that has managed to suck in so many of the world’s queries on the web is a good example how a service can become  a de facto standard  controlling  parts of the internet ecosystem.

The consequences in using VPAs will stretch far beyond the ability to speak a question into your smart phone and get an immediate answer, or to have warnings about heavy traffic “pushed” to you at the time you normally leave for work. If the VPAs catch on, they are likely to take over many of the decisions that come up in everyday life as they try to anticipate their users’ needs. According to Gartner Inc. one of the world’s leading information technology research and advisory companies, the importance of apps in delivering services will diminish and the emergence of virtual personal assistants (VPAs) will replace functions and services currently performed by apps.

Looking at this trend it comes as no surprise that Google has announced their own line of smart Phones called PIXEl. They also announced a bidirectional, WLAN connected  loudspeaker called Google HOME for home based voice response applications similar to Amazon’s device named  ECHO and its language interface ALEXA. Both Google devices announced in September 2016 will be supported by Google ASSIST which is an improved version of Google NOW.

“We are going to be talking to our computers,” says Oren Etzioni, who heads the Seattle-based Allen Institute for Artificial Intelligence, set up by Microsoft co-founder Paul Allen, adding that this includes phones. “But the truth is, all the devices that exist today are short on actual ability compared with the kind of capabilities we want.” The future, as Etzioni sees it, belongs to the company that can make a personal assistant something like a good hotel concierge: someone you can have a sophisticated dialogue with, get high quality recommendations from and who will then take care of every aspect of booking an evening out for you. “Book me a table for three in an excellent restaurant downtown with easy parking”. To fulfill that desire, the technology would need not only a high level of natural language recognition, but the ability to draw information from different services (a restaurant review site, a maps app) and issue instructions through a reservation system. This points to a post-app world, where pieces of information and service components that currently reside in standalone apps are stitched together to resolve life’s many small, daily problems. The acute need to find the right app will become secondary to the need to complete the task.

Matthew Wong, a research analyst at CB Insights, which tracks private investment in the tech sector, says the VPA is an area where the big tech companies are investing heavily. They are hungry to acquire new technology to make their products more sophisticated because there is money to be made in automating everyday processes. If they can pull it off we will spend more time with our smart phones – which means more ad revenue or device sales. This trend also provides  a potentially lucrative area for startups.

Viv Labs, a three-year-old AI startup backed by $30m, including funds from Iconiq Capital, which helps manage the fortunes of Mark Zuckerberg and other wealthy tech executives is working on a far advanced VPA.  Dag Kittlaus co-founder and CEO of Vif Labs  describes their product as a “global brain” – a new form of voice-controlled virtual personal assistant. Viv will be able to perform thousands of tasks, and it won’t just be stuck in a phone but integrated into everything from fridges to cars. “Tell Viv what you want and it will orchestrate this massive network of services that will take care of it,” he says.

It is an ambitious project but Kittlaus isn’t without a track record. The last company he co-founded invented Siri, the original virtual assistant now standard in Apple products. Siri Inc was acquired by the tech giant for a reported $200m in 2010. The inclusion of the Siri software in the iPhone in 2011 introduced the world to a new way to interact with a mobile device. Google and Microsoft soon followed with their versions. More recently they have been joined by Amazon, with the ECHO a device you can talk to, and Facebook, with its experimental virtual assistant, M. But, Kittlaus says, all these virtual assistants he helped birth are limited in their capabilities. Enter Viv: “What happens when you have a system that is 10,000 times more capable?” he asks. “It will shift the economics of the internet.”

According to a press release issued in October 2016 Samsung has Acquired Viv Labs for an undisclosed sum. After its massive failure to launch the Galaxy Note 7 it appears that Samsung  wants to recover with more than just another Galaxy model. According to a Samsung spokesman their new VPA based on Viv should become available in the US by spring 2017.

A key question determining the outcome of the battle in respect to the control of the VPA market will be whether the general-purpose VPAs provided by  the tech giants become dominant in steering people through this new world, or whether users will gravitate to more narrowly focused intelligent guides to help them navigate through specialized applications.

The more a VPA knows about the preferences of its user the higher its potential influence and user value in its decision making processes. This of course raises many ethical and data security issues. The question which provider of a VPA one can trust will be become equivalent to the question which bank one trusts to handle ones financial assets. Perhaps the road is open to a new business model for companies that provide ‘data-trust-services’.