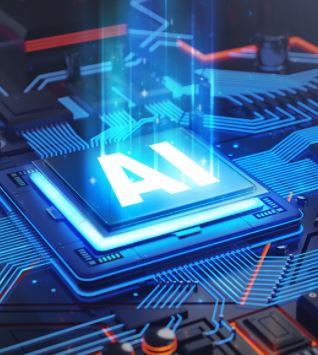 One task of AI is to mimic the intelligence and functionality of the human brain with the goal of advancing humans towards a further level of evolutionary development. While this mindset raises many philosophical issues, often associated with fear, the socio-economic impact of creating AI through copying our own intelligence requires  a methodology for assessing the impact of intelligence under various conditions. While current AI products and services are still in a state of infancy in providing corresponding tools for comparing the efficiency of their solutions,  methods exist for testing the cognitive and emotional components of human intelligence. IQ (Cognitive Intelligence Quotient) and EQ (Emotional Intelligence Quotient) represent generally accepted  indicators for matching job requirements with individual’s level of intelligence. While the EQ has gained in importance with intelligent machines gradually replacing cognitive tasks, the thought model presented with this essay implicates the need for an additional intelligence quotient for testing our ability to apply AI in problem solving situations. For the sake of representing this concept, the term ‘AIQ’ is proposed, mainly for providing guidance as to how to optimally “cross the bridge” between artificial and human intelligence.

Definition and Limits of Human Intelligence

According to many behaviourists and psychologists ‘intelligence’ can be understood as mental or behavioural ability of an organism to solve problems occurring in its natural and social environment, culminating in the appearance of novel solutions. This includes forms of associative learning and memory formation and innovation as well as abilities requiring abstract thinking and concept creation. In the past neuroscience has seen many attempts to correlate intelligence with brain properties. A much-discussed trait is absolute brain size, because some experts were convinced that bigger brains meant higher intelligence. Others look for neurobiologically more meaningful traits like the number of neurons in the brain, relevant for its ‘information processing capacity (IPC)’ and the level of general intelligence. Defining this level, a psychometric ‘g-factor’ is applied to define the efficiency of working memory and mental manipulation abilities. Despite the impressive complexity and processing power of the human brain, it is severely limited in its capacity. Behavioral research has highlighted bottlenecks of information processing that can cripple our ability to consciously perceive, hold in mind, and act upon the visual world.

Building a Bridge between Biological and Artificial Intelligence

Although AI has surpassed expectations in specific applications (dubbed Narrow AI), a seemingly insurmountable gap remains between artificial and human intelligence. To overcome this gap, it is necessary to establish a bridge between biological brain science and AI-research, equivalent to a transfer from knowing the brain to simulating the brain. With this bridge in place, we can test and compare our true thinking capacity with artificially computed results. Exploring brain functionality by applying brain-imaging technologies, for example, enables us to correlate neuroscientific experiments with the results of mathematical modelling. Today the path from learning to thinking represents a major hurdle for achieving human-like intelligence. Considering the thousands of researchers working globally on ‘cracking’ the brain code and the enormous financial resources provided, it is likely that within decades this ‘holy grail’ of AI-research will be conquered. At this point, also referred to as technical Singularity, the computational and algorithmic capacity of AI will outperform human intelligence in problem-solving tasks, challenging humans and society how to best take advantage of AI without losing control.

From IQ to EQ

The psychologist Howard Gardner has suggested that intelligence is not simply a single general ability. Instead, he suggests that there are multiple intelligences, and that people may have strengths in a number of these areas. The term ’intelligence quotient’ or IQ was first coined in the early 20th century by the German psychologist William Stern. About the same time Alfred Binet, a French psychologist, developed the very first intelligence test to help identify school children who needed extra academic assistance. Since that time, intelligence testing has emerged as a widely used tool that has led to developing many other tests of skill and aptitude. In his book Emotional Intelligence, psychologist Daniel Goleman suggested that EQ (or emotional intelligence quotient) might be more important than IQ. The IQ refers to an individual’s cognitive abilities such as logic to solve problems, plan and strategize, understand abstract ideas, learn and adapt to change or grasp and use language for reasoning. In contrast the EQ refers to an individual’s ability to perceive, evaluate and express emotions, showing empathy while controlling one’s own emotions or using emotions to facilitate social communication. In the past, people with high IQs were destined for a life of accomplishment and achievement. However, the debate whether intelligence was the product of genes or the environment (nature versus nurture debate) continues. Moreover, critics like Daniel Coleman conclude that intelligence represented by a high IQ was no guarantee for success in life and perhaps a too limiting concept to fully encompass the wide range of human abilities and knowledge. Research has found that individuals with strong leadership potential tend to be more emotionally intelligent, suggesting that a high EQ is an important quality for business leaders and managers. Moreover, there is a consensus among behavioral scientists that raising the EQ can be learned as part of one’s own personality development.

From the Exploration to the Application of Intelligence

Over the last decades intelligence-research has intensified significantly as the economic value of intelligence is gradually substituting values associated with human’s physical assets. To understand the impact of this development, it helps to distinguish between the research methods involved (Exploration) and its practical implications (Application) for extending our knowledge about intelligence both in an artificial as well as a biological context.

The Exploration of Intelligence is driven by the following scientific disciplines:

simulation of biological brain architectures by mapping the connectivity between neurons and synapses. These maps are used to simulate brain activity under various conditions, with details currently available to simulate the functionality of a mouse brain.

correlating behavioural tasks of intelligence by monitoring the reaction of biological neurons invasively or non-evasively in the brain while behavioral and cognitive tasks are performed. Major advancements in Neuroimaging combined with data analytics are accelerating this branch of intelligence research.

The Application of intelligence for performing the following key tasks:

Learning: Learning and memorizing is a fundamental asset for human value generation and strongly relates to our ability to sustain a fulfilled life. The better we understand and manage the learning process, the better we are able to adapt to change. Learning implies the acquisition of external ‘world-knowledge’ as well as the ability to self-reflect about one’s own personality.

Communicating: The use of language and symbols to interact with others is key in building-up and maintaining our socio-economic structure. With the global expansion of the internet, content and its semantic implication (meaning) has become the most valuable asset for digitally enhanced communication, both in machine-to-machine as well as human-to-machine scenarios.

Deciding: Decision-Making is one of the most elementary tasks humans perform every day. We might decide intuitively or after an elaborate analysis of the various alternatives for reaching the best decision. A quick response might be crucial for a business reacting to a competitor’s action or it might be crucial in saving one’s life in a health-related emergency.

An ‘exploration-application’ matrix, as represented below, provides a framework for testing our own biological intelligence against its artificial, computational replication for solving a given problem:

Doing so, we must understand the limits and advantages of the artificial version as much as we need to understand the limits of our own personality and our ability for making a judgement about the solution proposed. For example, using an AI-system to express empathy might provide biased results or a self-driving robot might interpret a physical condition the wrong way, causing an accident. Hence, in addition to IQ und EQ, a newly defined AIQ is required for testing one’s creativity and ability for assessing the solution proposed by the AI-system, stipulating a mindset of understanding biological as well as artificial intelligence.

The AIQ as Indicator for Creativity

Creativity is defined as the ability to generate or recognize ideas and alternatives or options that may be useful in solving problems. To communicate these ideas convincingly and trustworthily is essential in a time of information-overload. To be creative, one needs to be able to view things in new ways or from a different perspective. Creativity can be observed through individuals who express unusual thoughts and who experience the world in novel and original ways. Tests of creativity measure not only the number of alternatives that people can generate but the uniqueness of those alternatives. For something to be creative, it is not enough for it to be novel: it must have value or be appropriate to the cognitive and emotional demands of the situation. Hence, high marks in IQ or EQ tests also sustain the need for a strong AIQ.

Fortunately, human beings are born creative and unfortunately they are taught to be uncreative as they grow older. Pursuing our creative potential tends to come to a halt when we grow up and existential concerns take over. The label ‘artist’  might have the attribute of ‘introversion and individualism’, implicating a drive towards non-productive geniality, lacking the know-how for real business innovation and value generation. Introducing the AIQ to break the barrier between biological and artificial intelligence requires an adjustment of our educational concepts. Hence, life-long education holds the key to unlock the potential of AI-enhanced humans. Above all, the combination of human-human collaboration enhanced by human-machine collaboration will advance intelligence to new levels with creativity as its main driver.