Neal Stephenson famously coined the term ‘Metaverse’ in his 1992 science fiction novel “Snow Crash” to depict a 3D photo-real digital meeting space, in which humans, represented by programmable avatars, interacted with one another. Late 2021, following Facebook’s rebranding to Meta, Microsoft positioned the Metaverse as “a digital space inhabited by digital representations of people and things.” This very broad definition implicates a Metaverse that is  community-owned, community-governed, and freely interoperable while protecting one’s privacy with access to a host of actual use cases, including commerce, art, media, advertising, healthcare, and social collaboration. According to Metaverse and Money: Decrypting the Future (citi.com) , using this broad definition, the total addressable market for the Metaverse could be between US$8 trillion and US$13 trillion by 2030, with total Metaverse users numbering around five billion. But getting to that market level is going to require infrastructure investment. The content streaming environment of the Metaverse will likely require a computational efficiency improvement far beyond today’s  levels. Investment will be needed in areas such as computing, storage, network infrastructure, consumer hardware, and game development platforms.

The Metaverse, the virtual world proposed by Meta (formerly Facebook), is still under construction – its main building block is AI. At a developer’s conference in February this year, Meta CEO Mark Zuckerberg presented some of the projects that his team of AI researchers has been working on and which he feels will be fundamental to its success. One of the challenges facing the company is to ensure that users are able to navigate through the Metaverse with a whole new generation of digital assistants and avatars. To support this navigation, Zuckerberg demonstrated an AI-tool that uses mixed reality glasses to superimpose digital images on the physical reality. During the conference, Zuckerberg also presented ‘BuilderBot’, a voice-powered bot that allows users to change their virtual surroundings with voice commands. “Put a sea there,” said Zuckerberg’s avatar, and suddenly a digital ocean showed up or “Now let’s add an island over there, and some cumulus clouds.”

During the conference Zuckerberg also referred to a real-time universal speech translator which he considers as significant as the development of conversational avatars. Until now, existing translation services take any text or audio in the language of origin, translate it into English, and from there to the target language. This method increases the probability of making mistakes and missing nuances. According to Zuckerberg, Meta is working on a system that will eliminate this middle step, using self-supervised machine learning to make direct translations without going through English. The goal is to make meetings between avatars of different nationalities as natural as possible. “The kinds of experiences you are going to have in the Metaverse are beyond what is possible in today’s  digital sphere. You are going to feel what you see and touch, and that will require advances in a wide range of areas, hardware and software,” said Zuckerberg in his presentation. “Again, the key to unlocking these advances is AI.”

Following the assumption that the Metaverse will indeed lead to the next industrial revolution, a myriad of consulting companies are offering their services to successfully implement the Metaverse in  a client’s corporate strategy. In a 72 page report, Value creation in the metaverse | McKinsey, McKinsey, as one of the global leaders in consulting, examines the emergence of the metaverse: its history and characteristics, the factors driving investment, how consumers and businesses are using it today and may in the future, its value-creation potential and how leaders and policy makers can plan their strategies and near-term actions. By surveying more than 3,400 consumers and 13 senior executives on the potential of metaverse adoption, they analysed how it may shift behaviors and the Metaverse’s value-creation potential. In their view the Metaverse has the potential to impact everything from employee engagement to the customer experience, omnichannel sales and marketing, product innovation, and community building. It may seamlessly combine our digital and physical lives by featuring a sense of immersion, real-time interactivity, user agency, interoperability across platforms and devices, the ability for thousands of people to interact simultaneously, and use cases spanning activities well beyond gaming. The Metaverse’s technology stack has four core building blocks: content and experiences, platforms (such as game engines), infrastructure and hardware (including devices and networks), and enablers (such as payment mechanisms and security). Ten layers span these components, providing the critical building blocks on which all Metaverse experiences are based (Graph provided by McKinsey). 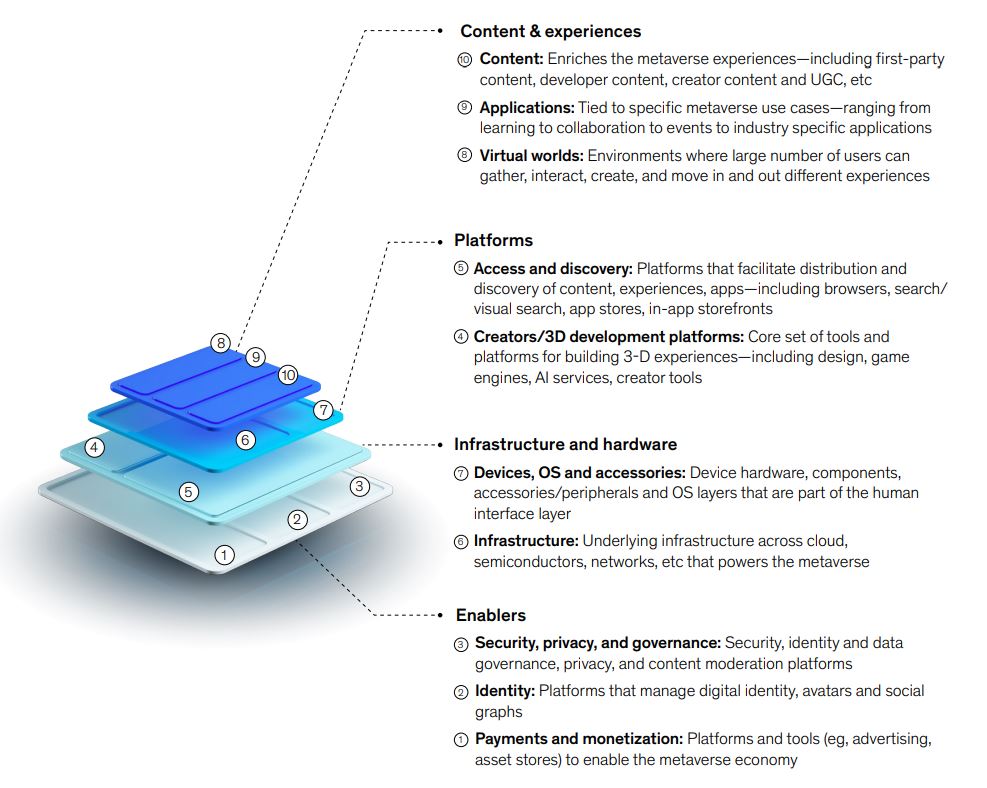 According to McKinsey the western Metaverse-related investments have reached more than US$120 billion of which a large part is driven by Microsoft’s planned acquisition of the gaming company ‘Activision’ for US$69 billion. Large technology companies are the biggest investors – to a much greater extent than they were for AI at a similar stage in its evolution. The Metaverse is shaping up to be the biggest new growth opportunity for several industries in the coming decade, with its potential to enable new business models, products, and services, and act as an engagement channel for both business-to-consumer and business-to-business purposes.

Critical Views of the Future of the Metaverse

According to Gian M. Volpicelli, Mark Zuckerberg’s Metaverse already sucks | WIRED UK , the fashioning of an entirely new economy remains the most revolutionary promise of the Metaverse. Zuckerberg sort of hinted at that in his interview, claiming that the Metaverse he plans to contribute to building might be a boon for creators, content producers, and developers. But his general keynote – his infinite office spiel – is a red flag, one that looks alarmingly like productivity software kitted out with VR glitter. If that were to prevail, the real threat to the Metaverse will not come from the overbearing Zuckerverse – but from Zuckerberg’s lame Suckerverse.

According to Keza Macdonald, I’ve seen the metaverse – and I don’t want it | Games | The Guardian  the tech world has been overtaken by the seductive idea of a virtual utopia, but what’s on offer looks more like a late-capitalist technocratic nightmare. The tech world seems to be leaning towards some kind of early 2000s conception of wearing a VR headset and haptic suit and driving a flying car towards your perfect pretend mansion in a soothingly sanitised alternate reality, where you can have anything you want as long as you can pay for it. Look at Mark Zuckerberg’s now-infamous presentation of the future of his company, with its bland cartoonish avatars and emptily pleasant environments. It is the future as envisioned by someone with precious little imagination. The virtual worlds of games and the early internet used to be an escape from the inequalities and injustices of the real one.  “To see the tendrils of big tech and social media extending towards the places that have been a refuge for me and millions of others is disturbing. I don’t trust these people with the future. The more I hear about the metaverse, the less I want to do with it”.

Dean Kissick writing for the New York Times, What’s All the Hype About the Metaverse? – The New York Times (nytimes.com), makes the interesting observation that in our century, the visionary role of creating new ways of experiencing life and observing the world has been passed from artists to engineers: it is now the founders of Silicon Valley who sell us the potential of utopian realities and draw our attention to the possibility of new universes. The creators of the Metaverse are artists, and the Metaverse is the art they are bringing to life, thereby, making it “real.” However, the idea of a Metaverse is still riddled with conflicts and one could argue that if something exists and people believe in it, then there should be no distinction between a real-world and a virtual world or real relationships and social relationships.

Limits of the Metaverse

The Metaverse provides a virtual space for mental experiences where body reaction can be sensed and analysed. To experience action, however, our body would have to be physically included, demanding a physical rather than a virtual space. The lack of experiencing this so called ‘embodiment’ defines one of the limits of the Metaverse and its often-overhyped expectations. Embodiment begins at birth. For the new-born infant, even the simplest act of recognition of an object can be understood only in terms of bodily activity. Embodied cognition can give us an explanation regarding the process through which infants attain spatial knowledge and understanding. According to former Yale University Professor Eleanor Gibson’s theory, exploration itself takes an essential place in the cognitive development. For example, infants explore whatever is in their vicinity by seeing, tasting or touching it before learning to reach to objects nearby. Then, infants learn to crawl, which enables them to seek out objects beyond reaching distance, but also to learn about basic spatial relations between themselves, objects and others including basic understanding of depth and distance. Hence, life-experiences starting in childhood and the human ability to think and self-reflect far exceed the virtual experience the Metaverse may provide.

It is difficult to predict where the Metaverse will be in five years and if we indeed are witnessing a Metaverse-induced paradigm shift towards the next industrial revolution. Heavy Metaverse-related investments carry a substantial financial risk. As true for most AI-related issues, human talent in dealing with complexity and an organisation’s ability to adapt to exponential change, seem to be the key to corporate survival, reaping the profits from the investment risks taken. The ‘foundation’ of Meta’s profit model – tracking users across the metaverse to target advertising and potentially sell digital goods with maximum effectiveness – could be interpreted as an attempt to misuse the Metaverse for surveillance capitalism. Hence, whether the Metaverse is indeed the path to follow, remains questionable – by 2030 we should know.