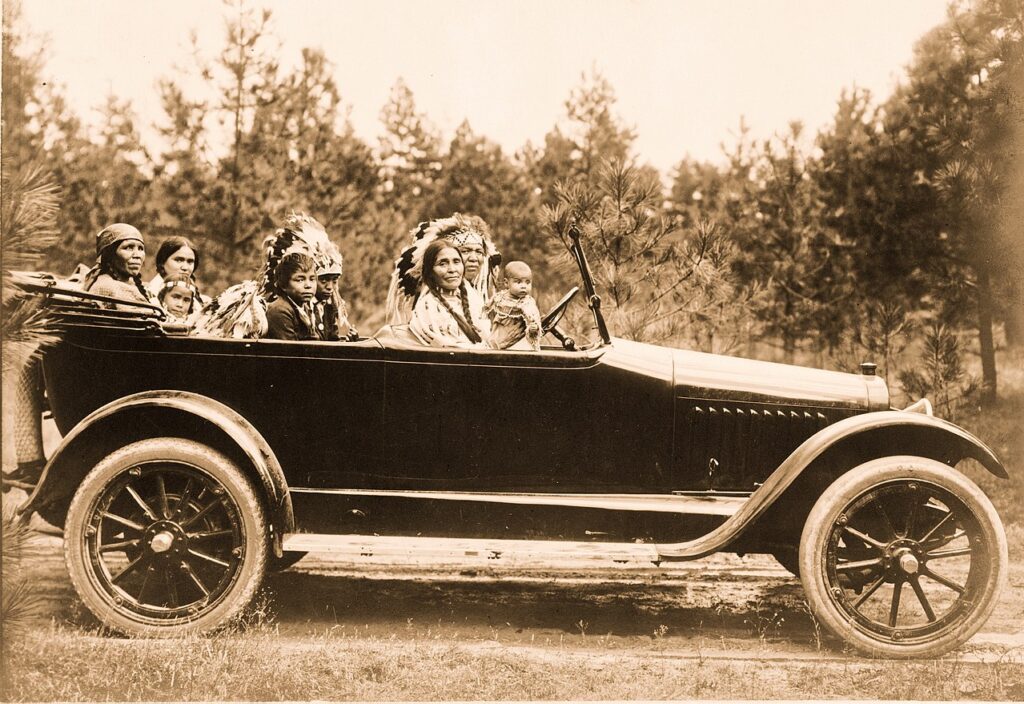 A family of Schitsu’umsh-Indians in their car (1916)      Picture Credit: Wikipedia

About 25 years ago, when the internet was established, few people realized its future global impact. The agreement of the large Telecom companies to standardize their communication services to enable cross-border exchange of binary data and to coordinate the IP (internet protocol) address space of users and servers set the foundation for an unprecedented development of new communication technologies, products and services with yet no end in sight. Here are some of the milestones that sequentially and hierarchically have been realized since the inception of the internet:

With this accelerating expansion of internet-based services, its misuse has also increased, threatening the very foundation of today’s global communication infrastructure through cyber-attacks, fake-news, theft of personal data etc. Besides addressing the technical issues to solve these problems, we must consider the cultural aspects as well. By all definitions that exist concerning culture, it seems obvious that the internet and its service portfolio is causing a massive cultural shift still in progress.

Much of the difficulty of understanding the concept of culture stems from the different usages of the term. Broadly speaking, it is used in three ways. First, culture refers to special intellectual or artistic endeavours or products, what might be called ‘high culture’ as opposed to ‘popular culture’. The second refers to a quality possessed by all people in all social groups, who could be arrayed on an evolutionary continuum from ‘savagery’ through ‘barbarism’ to ‘civilization’. The third and last usage of culture emphasizes the uniqueness of the many and varied cultures of different peoples or societies.

Culture rules virtually every aspect of our lives. In fact, the products of a culture which we perceive with our five senses are simply manifestations of the deeper meaning of life – what we do, think and feel. Culture is taught and learned and shared. And yet, culture is not monolithic – individuals exist within a culture. Finally, culture is symbolic. Meaning is ascribed to behaviour, words and objects and this meaning is objectively arbitrary, subjectively logical and rational. For example, a ‘home’, is a physical structure, a familial construct and a moral reference point – which is distinct from one culture to another.

Culture is vital because it enables its members to function with one another without the need to negotiate meaning at every moment. Culture is learned and forgotten, so despite its importance we are generally unconscious of its influence on the manner in which we perceive the world and interact within it. Culture is significant because as we work with others it both enables us and impedes us in our ability to understand and work effectively together both nationally as well as internationally. Consequently, living through a cultural shift generates unrest, fear and the need to reposition and reinvent our social and personal framework.

Professor Geert Hofstede’s cultural dimensions theory is widely accepted as a framework for cross-cultural communication. It describes the effects of a society’s culture valued by its members, and how these values relate to behaviour. Hofstede developed his original model as a result of using factor analysis to examine the results of a worldwide survey of more than 100’000 IBM employees’ values in 50 countries between 1967 and 1973. He defines cultural norms with the following six indices:

Individualism vs. collectivism index (IDV): This index explores the degree to which people in a society are integrated into groups. Individualistic societies emphasize the ‘I’ versus the ‘we.’ Its counterpart, collectivism, describes a society in which tightly integrated relationships tie extended families and others into in-groups.

Uncertainty avoidance index (UAI): The uncertainty avoidance index is defined as a society’s tolerance for ambiguity, in which people embrace or avert an event of something unexpected, unknown, or away from the status quo. Societies that score a high degree in this index opt for stiff codes of behaviour, guidelines, laws. A lower degree in this index shows more acceptance of differing thoughts or ideas.

Masculinity vs. femininity index (MAS): In this dimension, masculinity is defined as a preference in society for achievement, heroism, assertiveness and material rewards for success. Its counterpart represents a preference for cooperation, modesty, caring for the weak and quality of life. Feminine societies share modest and caring views equally with men.

Long-term orientation vs. short-term orientation index (LTO): This dimension associates the connection of the past with the current and future actions/challenges. A lower degree of this index (short-term) indicates that traditions are honoured and kept. Societies with a high degree of this index (long-term) view adaptation and circumstantial, pragmatic problem-solving as a necessity.

Indulgence vs. restraint index (IND): This dimension refers to the degree of freedom that societal norms give to citizens. Indulgence is defined as a society that allows relatively free gratification of basic and natural human desires related to enjoying life and having fun. Its counterpart is defined as a society that controls gratification of needs and regulates it by means of strict social norms.

The following chart summarizes the results of Geert Hofstede’s interviews in Brazil, China, Germany and the US, providing a comparative score of the six indices surveyed:

The biggest difference is found in ‘Individualism vs Collectivism’ with the US scoring 91 points compared to China scoring 20 points. The survey was conducted between 1967 and 1973 before the internet was established. Due to the massive public surveillance and control of internet services in China, the difference if measured today, is likely to be larger.

While Hofstede’s theory is primarily directed towards comparing cultural issues across different countries, the indices applied can also be used to describe a cultural shift within countries or societies based on technological ‘disruptions’ as caused by the introduction of the internet 25 years ago. Specifically, the index ‘Individualism vs. collectivism (IDV)’ addresses issues which are relevant within our networked society. As our daily lives are more and more penetrated and influenced by on-line activities, its consequences on organisations and individuals in respect to individuality and collectivism require serious reflection how to maintain the cultural values of our western society.

The case of Individualism:

‘Self-actualisation’ is one attribute of individualism which – following the experience of a devastating world war and the following economic recovery also termed ‘Wirtschaftswunder’ – has led to a ‘Cult of Self’, supported by a humanistic psychology movement that became popular in the early 1960s. The psychologist Abraham Maslow was one of its earliest supporters, proposing that humans have a hierarchy of needs. The higher-order need to achieve our full potential (which he called self-actualization) could not be achieved until our lower-order needs (like food and water, physical safety, and relationships) were met. When he proposed his ‘Theory of Human Motivation’, Maslow never envisioned a world or a workplace that would be digitally transformed. Digital transformation has greatly influenced even the most basic of human needs, including how we get work done or how we communicate with each other and/or are perceived by others. Being part of an artificial intelligent network to some extent contradicts the concept of ‘self-actualisation’. While a hierarchy of needs still applies, managing networked relationships is vital in maintaining individuality.

The case of Collectivism: Leaving the Cult

To some, realization is growing that the ‘Cult of Self’ is a dead-end street and there is more to life than being an isolated, high-performance achiever. Focusing on self-acceptance as an alternative to boundless self-esteem does not imply self-loathing. Where self-esteem can lead to subjective overvaluation regardless of an objective reality, self-acceptance means understanding and accepting one’s own personality in a given life-situation. Research has shown that self-esteem and self-acceptance are identical predictors of happiness and optimism, but only people high in self-acceptance hold positive views of themselves that are not dependent on external validation (like participation ribbons, Facebook likes, and gold stars). Hence the development of one’s own personality as a means to be a valuable member of our society, taking advantage of networked intelligence and social connectivity, might lead towards a revised version of self-actualization. In Social Identity Theory, psychologists have long identified that social interactions are in fact at the heart of our own identity formation processes.

Instead of looking at creativity and innovation as a process, it may be better to see it as a journey. It is a collaborative adventure that involves people with different expertise and varying points of view. Innovative organisations amplify differences rather than minimise them. Great ideas tend to come from organisations that embrace diversity and conflict. According to Linda Hill, Professor at Harvard Business School who studies collective genius, innovative organisations use discovery-driven learning rather than trying to get people behind a defined vision. The head of Google’s infrastructure leadership team said “I’m not the visionary, I’m the social architect. I’m creating the space where people are willing and able to share and combine their talents and passions. Individuals at all levels and in every department are encouraged to give feedback and share opinions with the most senior people.”

This mindset is a must to take advantage of the ever-growing usability and capability of networked AI. Within a very short period of time a cultural shift is disrupting not just businesses but our daily lives as well. To successfully adapt requires foremost two things: life-long education and the implementation of ethics that define and secure our values in a new age of human existence.