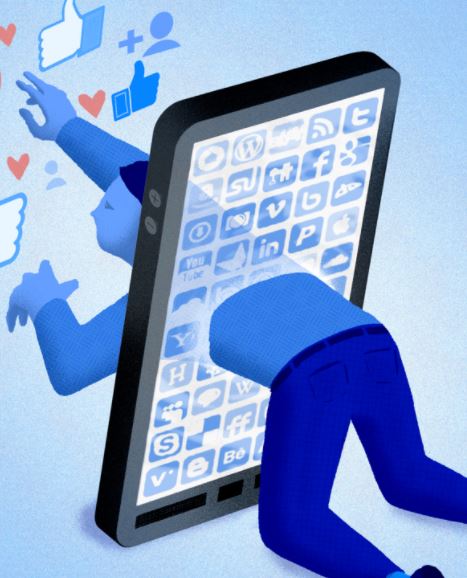 Social media is no longer a niche product. It shapes our relationships, our behaviour, our work and our brains. The largest social media platforms use algorithms that are specifically designed to influence users in their decision-making. They use psychology and neuroscience to capture our attention and play with our emotions. In her book ‘The Age of Surveillance Capitalism’ Shoshana Zuboff, Professor at Harvard, provides a few detailed facts of the unprecedented power of surveillance capitalism and the quest by big-tech corporations to predict and control our behaviour. Vast wealth and power are accumulated, where predictions as to our behavior are bought and sold and the production of goods and services is subordinated to a new “means of behavioral modification.” Social media has become an integral part of our society, but the question remains how to negotiate our relationship with it and how to battle the threat of addiction.

Although many traditional newspaper organisations are frustrated because of limited direct monetisation, they use social media companies like Facebook (now Meta) for  the distribution of content. According to the  Social Media and News Fact Sheet | Pew Research Center, released in September 2022, digital news has become an important part of  media consumption with social media playing a crucial role as provider.

In terms of market share of U.S. adults, Meta owns 70% of the market with YouTube owning a staggering 81%  as video is becoming the preferred way of news consumption. Roughly a third of U.S. adults (31%) say they regularly access news from Meta while a quarter (25%) regularly gets news from YouTube.  Smaller shares of digital news consumption go to Twitter (14%), Instagram (13%), TikTok

(10%), Reddit (8%). LinkedIn (4%), Snapchat (4%), Nextdoor (4%) and WhatsApp (3%). When looking at the proportion of each social media site’s users who regularly get news, some sites stand out as having a greater portion of users turning to the site for news although their total audience is relatively small. For example, while Twitter is used by 27% of U.S. adults, about half of its users (53%) turn to the site regularly to access news. On the other hand, roughly the same share of adults (31%) use LinkedIn, but only 4% of its users regularly obtain news from this site.

On several of the social media sites, adults under 30 make up the largest share of those who regularly get news from the site. For example, half or more of regular news consumers between ages 18 to 29 use Snapchat (67%), TikTok (52%) and Reddit (50%).

With a share of just 3%, WhatsApp rates low as a Social Media platform. However, one should keep in mind that next to E-Mail,  it is one of the most widely used communication tools, fuelling the  ongoing controversy about Meta’s ownership and additional access to a vast pool of user data, strengthening its grip over the social media market.

According to A Psychiatrist’s Perspective on Social Media Algorithms and Mental Health (stanford.edu), as of 2021 there were over 3.78 billion social media users worldwide, with each person averaging 145 minutes of social media use per day. With users spending over two hours on-line , psychologists and psychiatrists are beginning to see the harmful impact on mental health: loneliness, anxiety, fear of missing out, negative social comparison and depression.

When a user’s photo receives a ‘like,’ the neurological dopamine pathways involved in motivation, reward, and addiction are activated. What keeps us hooked on social media is not just the pleasure rush of the ‘like’. It is the intermittent absence of the ‘like’ that keeps us engaged, trapping users into endless scrolling loops. When presented with the curated feeds of other people, we are vulnerable to frequent and extreme upward social comparisons which can lead to a number of negative side-effects such as erosion of self-esteem, depressed mood and decreased life satisfaction. Some people try to cope with eroded self-esteem by attacking other people’s sense of self by means of cyber-bullying. Additionally, with advances in facial recognition and facial augmentation, image-based apps provide filters in presenting one’s personality. To appear more attractive might just backfire as an individual gets trapped into a distorted self-image.

As social media tries to minimize harm and to promote wellbeing, one can observe that the effort associated with making apps less addictive is going to come at a loss of growth. Government attention towards the dangers of surveillance capitalism increased after the exposure of the Facebook-Cambridge Analytica scandal early in 2018. In response to the misuse of surveillance, multiple states have taken preventive measures. The European Union has defined the rules and regulations on misusing big data with a legal framework known as the ‘General Data Protection Regulations’. However, implementing preventative measures against the misuse of surveillance is difficult. Despite the staggering fines that have been levied against a few Big-Tech companies, there are loopholes such as the request to accept Cookies for viewing content.

According to Social Media Effects on Teens | Impact of Social Media on Self-Esteem (childmind.org), the report presents a number of facts why we should be concerned. “As a species we are very highly attuned to reading social cues”, says Catherine Steiner-Adair, a clinical psychologist. “There is no question that teens are missing out on very critical social skills. Teens experience a nonverbal context of communication where body language, facial expression, and even the smallest kinds of vocal reactions are rendered invisible.” Learning how to make friends is a major part of growing up. But when friendship is conducted on-line, teens are stripped of many of the most personal aspects of communication. Teens are not hearing or seeing the effect that their words are having on the other person. Another danger for teens communicating more indirectly is based on the fact that it is easier to be cruel. “Teens text all sorts of things that you would never in a million years contemplate saying to anyone’s face,” says Donna Wick, a clinical and developmental psychologist. She notes that this seems to be especially true of girls, who typically do not like to disagree with each other in ‘real life’. “We forget that relational aggression comes from insecurity and feeling awful about yourself with the urge to put other people down, so you feel better.”

Another problem induced through social media platforms is the use of smart devices such as phones or tablets, creating a feeling that one is never alone. Teens update their status, share what they are watching and have apps that let their friends know their specific location on a map at all times. The result is that teens feel hyperconnected with each other. The conversation never needs to stop, and it feels like there is always something new happening. The best advice for parents for helping teens to build a healthy self-esteem, is to get them involved in something that they are interested outside the realm of social media. This could be sports, music or volunteering – anything that sparks an interest and gives them self-confidence.

The Neuroscientific View Of Social Media

According to What Social Media Does to Your Brain – NeuroGrow, the average person spends over 3 hours on the phone each day, including approximately two and a half hours on social media. While it may seem like a harmless pastime, research shows that doing anything repeatedly for extended amounts of time can cause physiological changes in the brain. Social media has the ability to both capture and scatter one’s attention. With a simple ‘refresh’, new information is at one’s fingertips. Through a process called ‘variable-ratio reinforcement’, one is constantly excited and rewarded to see fresh new posts. Studies show that this ability to capture your attention has an adverse effect on your brain. Heavy social media users perform worse on cognitive tests, especially those that examine their attention and ability to multitask. Compared to moderate to light social media users, heavy users need to exert more effort to remain focused in the face of distraction. Researchers hypothesize that since social media is easily accessible and competes for your attention with the promise of perpetual new content, heavy social media users become less able to ignore distraction. Not only does this lead to poorer cognitive performance, but it shrinks parts of the brain associated with maintaining attention. Social media’s central feature, the sharing and storing of your experiences, may actually be altering what memories you keep and which ones you do not. In a study, one group of participants were asked to record an experience using social media. Another group was asked to simply experience the event without recording it. At the end of the study, those who had recorded or shared the event via social media performed worse and showed more of a memory deficit than those who experienced the event without recording it. Externalizing an experience with social media worsened participants’ memory because their brain received the message that it did not need to hold on to information that was stored elsewhere. Consequently, not only did these individuals lose some memory of their original experience, but they may also experience longer-term deficits in the size and function of their brains.

Corporations selling products and services use social media for building customer loyalty and trust. This is part of their business strategy.  Doing so, they have to provide protection against cybercrime and Fakenews. The user’s responsibility is to protect his personal autonomy to decide. The complexity of the issues related to social media is vast. Today’s teens are challenged to find a human-centric way to incorporate social media into their every-day life against the odds of being manipulated. Social media started twenty years ago. When today’s teens become adults, we should know if this merger of machines and humans was successful.