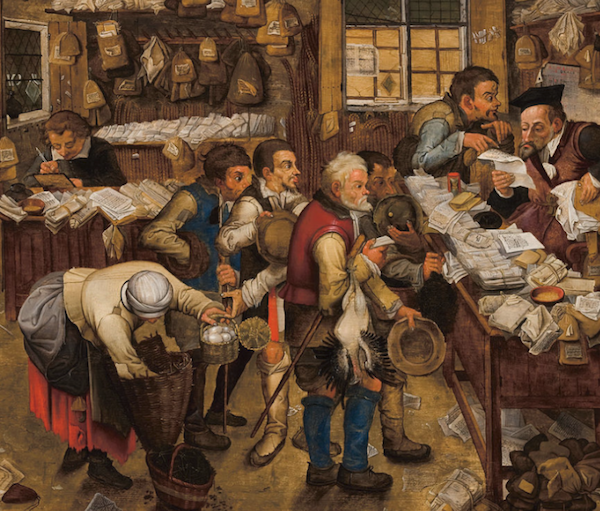 Machine-intelligence requires massive computer resources in combination with large data libraries and highly specialized machine-learning algorithms. The sale of services and products that employ machine-intelligence generates income which is typically taxed on transaction value and corporate profit. The financial interests of professional data providers are protected by copyright laws; however, the vast data generated by humans via internet connectivity is ‘free of charge’. The phenomenal growth of Facebook, Google and Amazon (FGAs) in recent years is based on a simple but very powerful business model:

Provide a service at no charge to get personal data and monetize this date for targeted advertising.

The volume of personal data collected is continuously growing, especially as the FGAs continue to push into new areas that collect more information about consumers while binding them closer with new services and products. In 2017 Facebook and Google earned around 65% of every online-ad dollar in America. This figure is expected to grow to 75% by 2019 as shown by the following chart:

Google dominates as much as 85% of online-search-ad revenue worldwide. When you combine the products Amazon sells with the products others sell using Amazon’s platform, the company controls about 40% of America’s rapidly growing e-commerce market. Amassing huge profits as result of their unique market position, the FGAs are reinvesting these profits in hiring the best talents from top universities to strengthen their own AI research and production facilities. They are buying up the most promising start-ups to foster their market dominance. Combined with ingenious strategies to use tax loopholes on a global scale, the current financial contribution of the FGAs to government institutions will not be enough to cover their fair share of the social costs caused by the disruptive impact of machine-intelligence.

A number of progressive think tanks and their advocates have issued reports over the past two years, documenting the decline in competition in the American economy, linking that decline to increasing inequality, and offering policy proposals to reinvigorate competition policy. The American Antitrust Institute, a respected organization long committed to more effective antitrust enforcement, published a report in June 2016 entitled “A National Competition Policy: Unpacking the Problem of Declining Competition and Setting Priorities Moving Forward.” This report lists three main symptoms of declining competition: rising concentration, higher profits to a few big firms combined with slowing rates of start-up activity, and widening inequality gaps. The report rather boldly claims: “There is a growing consensus that inadequate antitrust policy has contributed to the concentration problem and associated inequality effects.” Many of those calling for stronger antitrust enforcement are especially concerned about what they see as the enormous power of the largest tech firms, notably Amazon, Apple, Facebook, Google and Microsoft. The Economist, calling these firms “high-tech wizards,” states:

“The superstars are admirable in many ways. They churn out products and services that improve consumers’ lives. They provide Americans and Europeans with an estimated $280 billion-worth of “free” services—such as search or translation—a year. But they have two big faults. They are squashing competition, and they are using the darker arts of management to stay ahead. Neither is easy to solve. But failing to do so might risk a backlash which will be bad for everyone.”

Simply saying that Amazon has grown like a weed, charges very low prices, and has driven many smaller retailers out of business is not sufficient. Where is the consumer harm? Size is not by itself an antitrust concern, and neither is the ability to squash competitors through copying as Facebook has done with the rival app Snapchat. “As long as the FGAs stay in the market position they’re in, it’s going to be kind of hard to go after them under the existing antitrust laws” says Herbert Hovenkamp, a University of Pennsylvania professor of antitrust law.

Instead of applying conventional antitrust theory, such as the effect of a merger of two companies on consumer prices, enforcers may need to consider alternative tools. One is to equate antitrust with privacy. Germany’s Federal Cartel Office, for example, is examining charges that Facebook bullies users into agreeing to terms and conditions that allow the company to gather data on their web-surfing activities in ways they might not understand. Users who don’t agree are locked out of Facebook’s 2 billion-strong social media network. The European Union’s fine of USD 2.7 billion in 2017 against Google for favoring its shopping-comparison service over rivals’ is an indication that the EU is taking a stronger stance against the dominance of the FGAs. While antitrust enforcement has a vital role to play in keeping markets competitive, antitrust law and antitrust institutions are ill suited to directly address concerns associated with the political power of large corporations or concerns related to income inequality or job creation. Finance reform, tax policy, education reform and other policies are far better suited to address these critical issues.

There is a growing agreement within the EU community to close the tax loopholes of internet trade, caused by shifting profits to countries with low tax structures. In a move dubbed the “Google tax”, Internet companies in the UK that legally avoid taxes by shifting profits overseas, face being taxed on royalties of UK sales. Some independent experts have suggested that Google is paying an effective tax rate on its UK profits of around 3%. A recent study found that Amazon paid eleven times less corporate tax in the UK than British bookstores. Frank Field, the Labour MP who chairs the Commons’ work and pensions committee, and who has led a series of campaigns highlighting tax avoidance, said: “The new UK budget offers the beginnings of a fightback against some of the most egregious and morally bankrupt methods of tax avoidance”.

Within the European community a majority of member states have agreed to start preparing a new levy on digital companies to compensate for low-tax regimes that have cost European governments billions of euros. A precondition for making FGAs pay taxes where they are due is to affirm the principle of “virtual permanent establishment”, whereby digital firms pay taxes in countries where they have a “significant digital presence”. So far member states have still some disagreements how to effectively implement taxation of FGAs. Given the urgency of the issue, a short and long term fix to the problem is being discussed. It is likely that in 2019 the FGAs will face a new tax landscape in Europe.

The social cost of disruption caused by machine-intelligence

By 2030, according to a recent McKinsey Global Institute report, as many as 375 million workers—or roughly 14 percent of the global workforce—may need to switch occupational categories as digitization, automation, and advances in artificial intelligence disrupt the world of work. The kinds of skills companies require will shift, with profound implications for the career paths individuals will need to pursue.

How big is that challenge? In terms of magnitude, it can be compared to coping with the large-scale shift from agricultural work to manufacturing that occurred in the early 20th century in North America and Europe. But in terms of who must find new jobs, we are moving into uncharted territory. Earlier workforce transformations took place over many decades, allowing older workers to retire and new entrants to the workforce to transition to the growing industries. One should also consider that the retraining of farmers to factory production workers required manual skills which farmers were already accustomed to. Today the speed of change is accelerating. The task confronting every economy, particularly advanced economies, will likely be to retrain and redeploy tens of millions of midcareer, middle-age workers. The fact that life expectancy is increasing and the cost to finance retirement is growing, compounds the problem. If we assume that – as an average – USD 2’000 are required per person, a staggering USD 750 billion would be required to reeducate 375 million individuals. Some of these costs will be compensated by corporate retraining programs. People without a job, however, will need government support at costs that are way beyond current social support and welfare budgets. Moreover we face the fact that income of a few highly talented people working for Google, for example, contrasts sharply with the income of individuals with average skills. To maintain our democratic values we need a redesign of our tax and social welfare system that takes into account the impact of machine-intelligence. To close the current loopholes taxing internet trade will help, but the unique position of the FGAs continuous to be enforced.

To cover the social cost of disruption caused by machine-intelligence requires new ideas and visions which go beyond current tax schemes. In an article titled “It’s Time to Tax Companies for Using Our Personal Data”, published by the New York Times in November 14, 2017, Saadia Madsbjerg, managing director of the Rockefeller Foundation, makes the point that our personal data generates hundreds of billions of dollars’ worth of economic activity all on the back of information about each of us that by some estimates is worth USD 1,000 per person per year.

To correlate data-volume with a tax index requires more detailed discussion. The tax will cut into the profit of FGAs without threatening their existence or business model. The funds collected should be used to provide financial support to government institutions, dealing with the effects of disruption caused by machine-intelligence and the social cost of retraining millions of middle-aged workers.