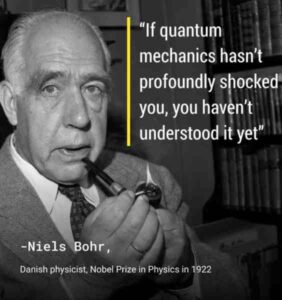 The fifth Solvay International Conference held in 1927 is considered the turning point for modern Physics. The subject was ‘Electrons and Photons’, as the world’s most notable physicists, including Albert Einstein and Niels Bohr, met to discuss the newly formulated quantum theory. 17 of the 29 attendees were or became Nobel Prize winners. Einstein’s ‘Special and General Theory of Relativity’ changed our perceptions of time, space, and gravity while Bohr, Pauli, Feynman, Schrödinger, Heisenberg, and Planck’s formulation of quantum mechanics fundamentally revolutionized our understanding of the infinitesimal world of electrons, protons, and neutrons. In contrast to classical physics, quantum theory – applied in physics, mechanics and biology – describes phenomena which are often counterintuitive to human thought, hence a mind-change is required to follow one of the most important paradigm-shifts humanities has experienced so far.

Some Basics about Quantum Mechanics

Quantum mechanics defines the behaviour of molecules, atoms and sub-atomic particles. For example, light can behave like a particle or appear in waveform. Within the last decades several hypotheses about quantum mechanics have been verified experimentally describing phenomena such as:

Tunnelling: Particles at the quantum scale  have properties of waves and light. Their exact location at any moment is described by a probabilistic wave function. As a result, particles such as electrons can, with a certain probability, traverse – or tunnel through – energy barriers. A particle that goes up against a potential barrier might cross it, even if its kinetic energy is smaller than the maximum energy applied against it by the barrier. Quantum tunnelling is applied in quantum computing and microscopy. It can also be used to measure the decay of radioactivity or nuclear fusion.

Superposition: This phenomenon of quantum behaviour can be illustrated with the double-slit experiment. In the basic version of this experiment a laser beam illuminates a plate pierced by two parallel slits while the light passing through the slits is observed on a screen behind the plate. The implication is that each quantum particle appearing as light passes simultaneously through both slits and interferes with itself. This combination of ‘both paths at once’ is defined as state of superposition.

Entanglement: This phenomenon describes what happens when a pair of particles interact such that the quantum state of each particle of the pair cannot be described independently of the state of the other particle. Regardless of the distance between an entangled pair of particles, measuring the state of one particle reveals information about the other at the same instant, causing Einstein to label this peculiarity as “spooky action at a distance.”

Quantum Biology and the Issue of Consciousness

One of the early efforts, applying quantum theory to biological processes, focused on consciousness and its connection to human brain functionality. In the early 1980s the British physicist and 2020 Nobel laureate, Sir Roger Penrose, suggested that quantum mechanics relate to consciousness. In his 1989 book ‘The Emperor’s New Mind’, Penrose proposed that quantum effects appear in human cognition and perception. “Maybe”, says Penrose, “our ability to sustain seemingly incompatible mental states is no quirk of perception, but a real quantum effect”. The human brain seems able to handle cognitive processes that still far exceed the capabilities of conventional digital computers.

Today some physicists suspect that, whether or not consciousness influences quantum mechanics, it might in fact arise because of it. They think that quantum theory might be needed to fully understand how the brain works. According to a recently published scientific paper titled ‘Giving Up on Consciousness as the Ghost in the Machine’ Frontiers | Giving Up on Consciousness as the Ghost in the Machine | Psychology (frontiersin.org) , there is compelling evidence that the existence and proper functioning of subjective awareness and associated psychological processes is causally dependent on the interplay of different brain regions. Mental states (our thoughts and feelings, and sense of self) are generated by electrochemical brain activity and remain dependent on such brain states. Without a brain or relevant brain states there are no mental states. Whatever subjective awareness is – it has nonetheless to be fundamentally linked to physiological alterations in the central nervous system. All mental operations require the temporal precedence of physiological processes in the brain before outputs are experienced in conscious awareness. In summary, there is no evidence that mental states can exist or are capable of being experienced without a functioning brain.

Quantum Theory and its Impact on Business Management.

The most fundamental difference between quantum mechanics and classical mechanics can be defined as follows: Quantum mechanics describes the dynamics of ideas, whereas classical mechanics describes the dynamics of machines. Our society builds largely upon mechanistic ideas and for most part, accepts the principle that any rational approach must be compatible with the principles and findings of science. Quantum mechanics provides an understanding of the mind-brain connection that not only is completely in accord with intuition and common sense, but that also describes the way in which mind-brain processes are generating ideas. Human brains are considered to have two kinds of thinking structures: serial thinking and associative thinking. Serial thinking implicates continuous, one-to-one, logical, rational and  goal-oriented problem-solving. Associative thinking is based on emotional and physical experiences. It helps us to identify patterns, learn skills, form habits and emotional relations, and to store tacit knowledge in our brain. Quantum management implicates the integration of serial and associative thinking in analogy to quantum processes like entanglement. According to a 2019 scientific paper, Review and Prospect of Quantum Management (scirp.org) ,  quantum management is defined by our creative, insightful and introspective thinking, proposing new concepts and models while challenging old stereotypes and mental models. In addition, quantum management helps us to adapt to exponential change and challenging new environments. In the mechanical age of the last century with its traditional management theories, everything was standardized and well structured. In contrast quantum management is focused on uncertainty and opportunity by emphasizing dynamics and constant change. Researchers have found that the use of quantum methods, such as quantum interference and quantum entanglement, can better explain the differences between people’s judgments and decisions than traditional behavioral models.

In the early 1980s, Nobel laureate Richard Feynman envisaged that quantum computers could provide a way to solve problems that are practically impossible to solve with conventional ‘Von Neumann’ computers. Unlike conventional computers, which have bits that can exist in either state of 0 or 1, with quantum computers the quantum bit (or qubit for short) provides additional states. It can exist as a discrete state (0 or 1) or as a superposition of both states, adding a third dimension for the processing of data. The more qubits are applied, the higher the performance increase over conventional computer architectures. Optimization problems in chemistry, economics, cryptography or weather forecasting are currently at the forefront of quantum applications. Next to resolving instability/reliability problems caused by environmental ‘noise’, major efforts are under way in providing new quantum-specific software tools for problem-solving.

Quantum sensors utilize quantum states for measuring physical events. They capitalize on the fact that quantum states are extremely sensitive to disturbances – this implies that they can be applied for extremely precise measurements, for example to predict volcanic eruptions based on deep underground observations, to see around corners or map brain activity in the smallest detail. Measurement devices which exploit quantum properties have been around for a while, such as atomic clocks, laser distance meters or MRIs (magnetic resonance imaging devices). A new generation of atom and photon-based sensing devices uses entanglement and the manipulation of quantum states to enhance sensitivity, opening the door to applications which so far could not be handled with conventional means.

Quantum communication is based on quantum key distribution (QKD) which uses the quantum states of photons to form a string of zeros and ones. Any eavesdropping between the sender and the receiver will change this string or key and be noticed immediately, protecting the integrity of data-sensitive transmission-applications. Chinese scientists have established the world’s first integrated quantum communication network, combining over 700 optical fibers on the ground with two ground-to-satellite links to achieve quantum key distribution over a total distance of 4’600 kilometres across China. As next step the research team will further expand the network together with their international partners from Austria, Italy, Russia and Canada. Improving the performance of the hardware while adding more satellites to the system and reducing investment costs are the key  goals to be achieved.

New quantum algorithms contemplating nature as a non-linear, probabilistic space, open the door to a new class of problem-solving with computational power far exceeding conventional ‘von Neumann’ systems. Mathematicians have attempted to use linear equations as a key to unlock non-linear, differential ones for decades. In the future quantum computers with hundreds of qubits and new quantum algorithms will be capable of cracking non-linear equations and non-linear dynamics without resorting to the approximation of linearity. Hence, the complexity of problems that can be solved, far exceeds what today’s conventional AI-systems are capable of, providing the means to digitally map reality with unprecedented accuracy.

Quantum technologies are gaining momentum and new applications are expected to migrate from research labs to real-world commercial environments within this decade. A first step is to understand quantum’s potential for an organization’s product and service offering and  to review the management processes required for a mind-shift towards quantum management in response to  the limits experienced with AI-focused applications. Realistically this effort will take years. But as the experience with success or failure of digital transformation stipulates, foresight and an early start to comprehend future impacts, challenges and risks characterizes the potential winners of the next industrial revolution.