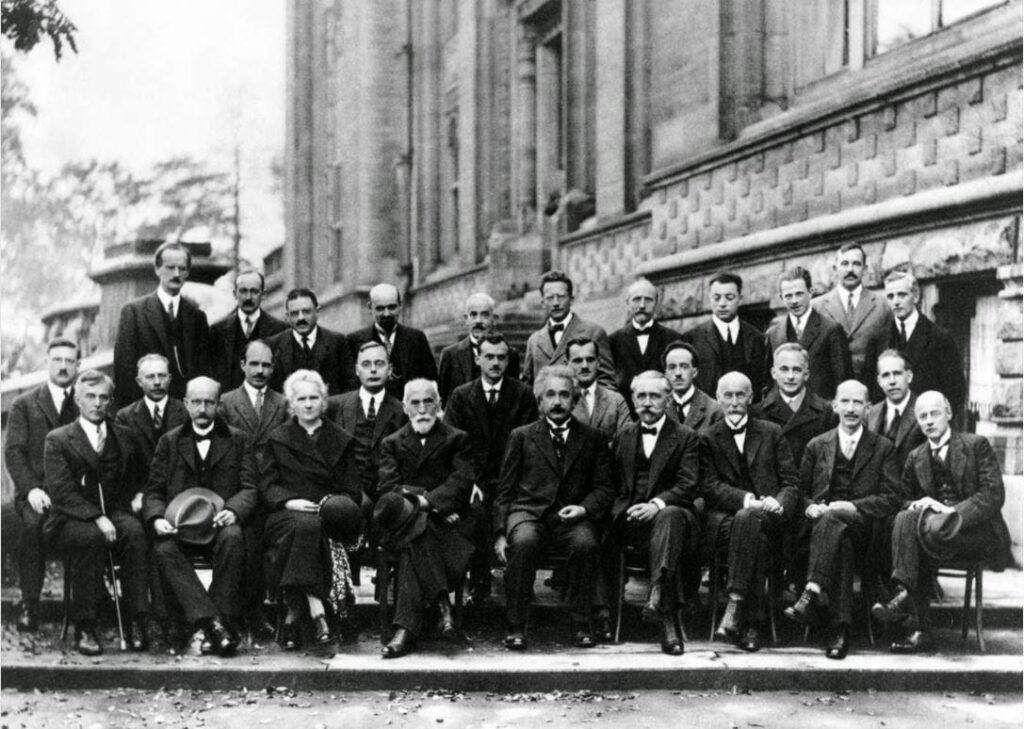 The Solvay International Conference in 1927 is considered the turning point for modern Physics.
17 of the 29 attendees were or became Nobel Prize winners. Picture Credit: rarehistoricalphotos

The last 110 years have yielded possibly the greatest advancements in the history of physics. Einstein’s Special and General Theory of Relativity changed our perceptions of time, space, and gravity while Bohr, Pauli, Feynman, Schrödinger, Heisenberg, and Planck’s formulation of quantum mechanics fundamentally revolutionized our understanding of the infinitesimal world of electrons, protons, and neutrons. In contrast to classical physics, quantum physics – with quantum mechanics as a subset – describes phenomena which are often counterintuitive to human thought. To bridge the two worlds of physics remains an unresolved challenge. What both scientific disciplines have in common though, is that mathematical equations and concepts are used in defining the laws of nature.

Some Basics about Quantum Mechanics

Quantum mechanics provides the calculation of probabilities of how physical systems can behave. It is typically applied in defining the behaviour of molecules, atoms and sub-atomic particles. Light, for example, can sometimes behave as a particle. Likewise, matter can also behave as a wave. This revelation ran counter to 200 years of experiments showing that matter (such as electrons) exists only as particles. Within the last decades hypotheses about quantum mechanics have been verified experimentally describing phenomena such as:

Superposition: This phenomenon of quantum behaviour is illustrated with the double-slit experiment. In the basic version of this experiment a laser beam illuminates a plate pierced by two parallel slits while the light passing through the slits is observed on a screen behind the plate. The wave nature of light causes the light waves passing through the two slits to interfere, producing bright and dark bands on the screen – a result that would not be expected if light only consisted of classical particles. The implication is that each quantum particle passes simultaneously through both slits and interferes with itself. This combination of “both paths at once” is defined as state of superposition.

Tunnelling: Particles at the quantum scale have wave-like properties. Their exact location at any moment is described by a probabilistic wave function. As a result, particles such as electrons can, with a certain probability, traverse – or tunnel through – energy barriers. A particle that goes up against a potential barrier might cross it, even if its kinetic energy is smaller than the maximum energy applied by the barrier. According to classical mechanics this particle would be trapped. Radioactive decay or nuclear fusion in stars are examples of tunnelling.

Entanglement: This phenomenon describes what happens when a pair or group of particles  interact or share spatial proximity in a way such that the quantum state of each particle of the pair or group cannot be described independently of the state of the others. Entanglement is a primary feature of quantum mechanics with no equivalent in classical physics. Regardless of the distance between an entangled pair of particles, measuring the state of one particle reveals information about the other at the same instant, causing Einstein to label this peculiarity as “spooky action at a distance.”

In the early 1980s, Nobel laureate Richard Feynman envisaged that quantum computers could provide a way to solve problems that are practically impossible to solve with conventional Von Neumann computers. Unlike conventional computers, which have bits that can exist in either state of 0 or 1, with quantum computers the quantum bit (or qubit for short) can exist in additional states. It can exist as a discrete state (0 or 1) or as a superposition of both states, adding a third dimension for the processing of data. Applying the principles of entanglement and superposition, quantum computers allow the simultaneous processing of data with multiple qubits in one single operation. To double its power, we need to add one more qubit to the circuit. Hence, the more qubits a quantum computer can handle, the higher its computational performance. The first tangible demonstration of a quantum computer outperforming a conventional one debuted in 2019. Researchers at Google used a 53-qubit quantum computer, to solve a problem which would have taken approximately 10’000 years to solve with a conventional supercomputer in under 200 seconds. Optimization problems in chemistry, economics, cryptography or weather forecasting are currently at the forefront of applications utilizing quantum computers in real-life settings. Looking ahead, the demand for trainability and dimensionality of large neural networks provides exciting new avenues for quantum computers in machine-learning and deep-learning applications. However, there still are some problems to be solved before an industrial-scale deployment of quantum computers can occur. Suspending qubits in a state of superposition is incredibly hard. To achieve stability, quantum computers need to be kept in refrigerators that cool down the qubits to temperatures just shy of absolute zero (-273°C). Additionally, qubits are susceptible to ‘noise’ (a phenomenon known as decoherence), which means that they lose their probabilistic quantum behaviour and with it their stored information. As a result, quantum computers so far are restricted to niche research domains and expensive laboratories. Cloud-services, however, are now available for learning and testing for a broader audience of researchers and application developers. While research is progressing in solving these hardware problems, mayor efforts are under way in providing software tools for quantum computing. High-Tech giants like IBM, Google, Microsoft, Intel, Amazon or start-ups like Zapata, D-Wave and IonQ, are all investing heavily in developing commercial applications for quantum computers, providing high-level languages, frameworks, and libraries for programming quantum computers. These frameworks and their tutorials have lowered the barrier of entry for quantum development. Hence, we can expect to see exciting new developments in quantum computing during this decade.

One of the early efforts, applying quantum theory to biological processes, focused on consciousness and its connection to human brain functionality. In the early 1980s the British physicist and 2020 Nobel laureate, Sir Roger Penrose, suggested that quantum mechanics relate to consciousness. In his 1989 book ‘The Emperor’s New Mind’, Penrose proposed that quantum effects appear in human cognition and perception. “Maybe”, says Penrose, “our ability to sustain seemingly incompatible mental states is no quirk of perception, but a real quantum effect”. The human brain seems able to handle cognitive processes that still far exceed the capabilities of conventional digital computers. Over the past decade growing evidence suggests that certain biological systems might employ features of quantum mechanics. In photosynthesis, for example, quantum effects help plants to turn sunlight into energy (fuel). Scientists have also proposed that migratory birds have a ‘quantum compass’ enabling them to exploit Earth’s magnetic fields for navigation or that the human sense of smell could be rooted in quantum mechanics. University of California physicist Matthew Fisher has argued that neurons possess certain molecules capable of behaving like a quantum computer. In a study published in 2015, he argued that the brain might contain molecules capable of sustaining more robust quantum superpositions above the -273°C barrier. Specifically, he thinks that the nuclei of phosphorus atoms may have this ability. Phosphorus atoms are everywhere in living cells. The phosphorus nuclei have a quantum property called spin, which makes them rather like little magnets with poles pointing in particular directions. Fisher says that the quantum-mechanical behaviour of these nuclear spins could plausibly resist decoherence despite the brain’s body temperature. That said, going from an intriguing hypothesis to demonstrating that quantum processing plays a role in the functioning of the human brain is a daunting challenge. Experiments must show that the brain has a mechanism for storing quantum information in qubits for sufficiently long times. There must be a mechanism for entangling multiple qubits, and that entanglement must then have some chemically feasible means of influencing how neurons fire in some way. In addition, there must also be some means of transporting quantum information stored in the qubits throughout the brain.  If the laws of quantum mechanics are indeed able to provide some clues about our brain’s computational capacity, that in turn could have major implications on many levels, from language understanding (semantics) to the brain’s functional behaviour such as the processing of emotions.

Current AI-applications are based on pattern recognition. In combination with artificial neural networks and machine learning algorithms, remarkable results in language processing, image recognition or drug design, to name just a few, have been achieved. Adding quantum mechanics to the equation with new quantum algorithms contemplating nature as a non-linear, probabilistic space, opens the door to a new class of problem-solving with computational power far exceeding conventional von Neumann systems. Mathematicians have attempted to use linear equations as a key to unlock non-linear, differential ones for decades. In the future quantum computers with hundreds of qubits and new quantum algorithms will be capable of cracking non-linear equations and non-linear dynamics without resorting to the approximation of linearity. As digital data, converted from analogue sensors in real-time, continues to grow at an exponential rate, we must rely on quantum mechanics to process the data. Quantum states correspond to probabilities rather than to absolute values. This fact also implies that human analysis and interpretation is still required in problem-solving. The complexity of problems we can solve, however, far exceeds what conventional AI is capable of handling today.

Creativity and imagination in applying quantum computing opens a new era for problem solving, especially in respect to climate, health and human behaviour. Taking advantage of the positive potential of Quantum-AI and to deal with its inherent complexity, a transdisciplinary approach across many scientific disciplines, combined with the willingness for stepping out of conventional mental silos, is a must. It might well be that we are entering a quantum age as the next evolutionary step in human development.