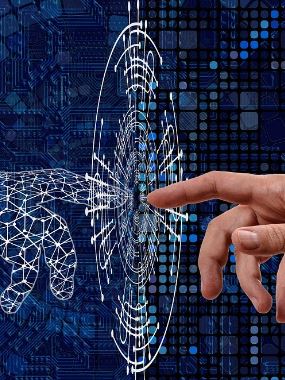 The computational model, comparing the brain to the computer, has been the most prominent metaphor in neuroscience and AI for decades. It implies that computers are very closely aligned to the functionality of the human brain. Any information-processing system consists of five main components — input, output, storage, processing and program. We can draw parallels between the brain and computers for each of these elements. Where it is appropriate, however, can be debated, particularly its usefulness for the advancement of science and technology. A growing number of indicators stipulate that the computer analogy is limiting our ability to look ahead, suggesting that a so-called ‘Transducer-Model’ might present a better foundation for explaining brain functionality.

Why the Brain ist not a Computer

Thousands of researchers are devoting massive amounts of time and energy observing and exploring brain-activity. Every day, we learn of new discoveries that shed light on how brains of animals and humans function. As a result, new AI-technologies will improve the analysis of our behaviour as well as our decision making. And yet, there is a growing conviction among many neuroscientists that the present approach of collecting more data for detecting patterns  has reached a dead-end. In an article recently published Why your brain is not a computer | Neuroscience | The Guardian,  the author Matthew Cobb, Professor at the University of Manchester, provides an overview as to why the computational metaphor of brain functionality is wrong. In 2017, the French neuroscientist Yves Frégnac argued that the tsunami of data we are producing is leading to major bottlenecks because, as he put it, “big data is not knowledge”. His colleague Romain Brette takes this argument a step further by challenging the most fundamental metaphor of brain functionality: coding. Since its inception in the 1920s, the idea of a neural code has come to dominate neuroscientific thinking. Brette’s fundamental criticism is that, in considering “code”, researchers inadvertently drift from a technical view – with a link between a stimulus and the activity of the neuron –  to a representational view, where neuronal codes represent that stimulus. By viewing the brain as a computer that passively responds to inputs and processes data, we forget that the brain is an active organ, part of a body that is interacting with the world, and which has an evolutionary past that has shaped its structure and function. The brain is not simply passively absorbing stimuli and representing them through a neural code, but rather is actively searching through alternative possibilities to test various options. The brain does not represent information – it constructs it. But to imagine how that might work in practice, we would need an understanding of neuronal functions that go far beyond anything we can currently envision. Moreover, vast computational power and a simulation that precisely mimics the structure of the brain are required. For this to be possible we first need to fully model the activity of a nervous system capable of holding a single state, never mind a thought. We are decades away from taking this first step and some researchers like Rodney Brooks from MIT are questioning if this might ever happen if we follow the computational metaphor.

The idea that our brains are like giant supercomputers, orchestrating and determining everything we do, is widespread. Science fiction scenarios like downloading the Internet directly to our brains or creating a new kind of a human with enhanced cognitive powers, are believed to become real in the not-too-distant future.  In his new book, The Biological Mind, Alan Jasanoff, professor of biological engineering at MIT, explains why this “cerebral mystique” creates a false understanding of the relationship between the brain and the body. It ignores bodily influences on our psychology or the impact of chemicals in the blood and bacteria in the gut. As a result, we overestimate our capacity for free will or equate brains to inorganic machines like computers. But a brain is neither a soul nor an electrical network: it is a bodily organ, and it cannot be separated from its surroundings.

In an interview with Simon Worrall from the National Geographic Magazine, Jasanoff explains that a dualistic view of the brain and its relationship to the physical body and the physical world makes us see ourselves as unnaturally self-contained. In other words, we view ourselves as things that operate from within, so we are less sensitive to things that influence us externally. New research suggests that our emotions as much as our brains, are key in mediating how we perceive and interact with the world. Probably the most famous person who has advocated the view that emotions are key to learning or behavior is Daniel Kahneman. His studies showed that there is this apparently rapid, irrational, shoot-from-the-hip way to make decisions, which is important in the behavioral side of economics. In neuroscience, Antonio Damasio, Professor for Neurology and Psychology argues that there is a loop between the body and the brain and that the body is cognitively involved in our actions. This does not match the view that the brain is a self-contained machine. “The brain is a biotic organ, embedded in a continuum of natural causes and connections that together contribute to our biological minds. If we want to solve our problems, we should not reduce them to problems of the brain. We need to keep a broad view, which recognizes how the brain is connected both to the body and to the environment”, says Damasio.

A new theory of how the brain works — the neural transduction theory — might upend everything we know about consciousness and the universe itself. According to this theory our bodies are completely encased by transducers. Our sense organs – eyes, ears, nose, tongue, and skin – transduce distinctive properties of electromagnetic radiation, air pressure waves, airborne chemicals and temperature into distinctive patterns of electrical and chemical activity in the brain.  In Your Brain Is Not a Computer. It Is a Transducer | Discover Magazine, Senior Research Psychologist Robert Epstein makes the point that evolution did not just create millions of new species of organisms, it also created millions of new types of transducers. Hard evidence that supports a neural transduction theory is lacking so far, but we are surrounded by odd phenomena that are at least consistent with such a theory. “The main reason we should give serious thought to such a theory is based on the sorry state of brain science and its reliance on the computer metaphor. Piano virtuoso and conductor Daniel Barenboim memorized all thirty-two Beethoven sonatas by the time he was 17, and he has since memorized hundreds of other major piano works as well as dozens of entire symphony scores. Do you think all this content is somehow stored in Barenboim’s brain? Studying his brain, you will never find a single note, a single musical score, a single instruction for how to move his fingers – not even a “representation” of any of those things. The brain is simply not a storage device”. If modern brain scientists begin to look for evidence that the brain is a bidirectional transducer, they might find it through a new understanding of neural pathways, structures, electro-chemical activity or brain waves. “It might take decades for us to see significant advances in transduction research, but with vast resources already devoted to the brain sciences, we could conceivably move much faster. If the transduction theory proves to be correct, our understanding of the universe and of our place in it will change profoundly. We might not only be able to make sense of dozens of odd aspects of human experience, but we might also begin to unravel some of the greatest mysteries in the universe: where our universe came from, what else and who else is out there – even whether there is, in some sense, a God”, writes Epstein.

Researchers from the Department of Computer Science at Cornell University and the School of Neuroscience at Tel-Aviv University have just published a new paper extending Epstein’s transduction theory to a probabilistic transducer theory. [2112.13388] The brain as a probabilistic transducer: an evolutionarily plausible network architecture for knowledge representation, computation, and behavior (arxiv.org).  According to their model the brain represents a probabilistic network of nodes and edges. Although it has some similarities to standard neural network models, there are some significant differences. Nodes and edges of the neural network act as transducers that use a set of relatively simple rules to determine how activation levels and weights affect each other. These simple rules allows the network to acquire increasingly complex knowledge and simultaneously act as a transducer that facilitates planning, decision-making and the control of behavior. Their research demonstrates how evolution could endow the network with initial adaptive rules and goals which are enriched through learning. Hence, the developing structure of the probabilistic transducer network determines what the brain can do, breaking the barriers of the computational metaphor.

The arguments to advance AI-research from a computer to a transducer metaphor are intriguing. However, this endeavour competes with several other theories to overcome the limits of present AI-systems, especially in respect to causality or consciousness.  Only time will tell which approach delivers the best results. Nevertheless, the human capacity to adapt to change will remain the limiting factor unless the quest for survival opens a new chapter in human evolution.