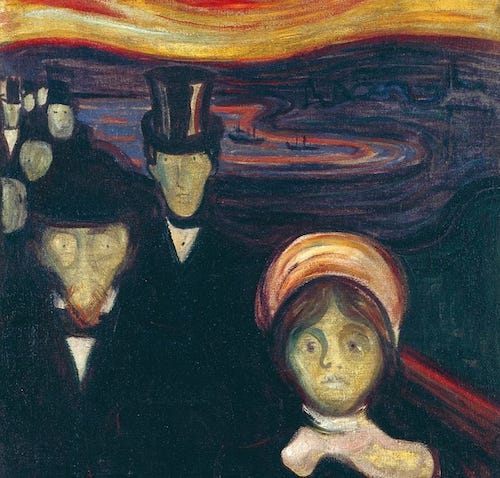 Anxiety is the reaction to stressful, dangerous, or unfamiliar situations. It is the sense of uneasiness, distress, or dread you feel before a significant event. Anxiety is distinguished from fear, which is an appropriate cognitive and emotional response to a perceived threat. David Barlow, Professor Emeritus of Psychology and Psychiatry at Boston University defines anxiety as “a future-oriented mood state in which one is not ready or prepared to cope with upcoming negative events”.

The behavioural effects of anxiety may include withdrawal from situations which have provoked anxiety or negative feelings in the past. Other effects may include changes in sleeping patterns, changes in habits, increase or decrease in food intake, and increased motoric tension. The risk of anxiety causing depression can, in the worst case, lead to self-destructive actions such as suicide.

In the current issue of the  Journal of Psychiatric Research, a team of researchers has published a study on the growth of anxiety between 2008 and 2018 based on data from the  U.S. National Survey on Drug Use and Health, representing an annual, cross-sectional survey on substance use and mental health. Prevalence of anxiety was estimated among individuals by age categories 18–25, 26–34, 35–49 and beyond 50. Time trends were tested using logistic regression. Sample sizes ranged from roughly 37’000 to 43’000 per year with response rates ranging from 73% to 88%. The study does not include data documenting the reported increase of anxiety caused by  the Covid-19 pandemic (isolation, economic lock-down etc.).

Results of the study

The following graph illustrates the % increase in anxiety from 2008 to 2018 mapped over the different age-groups: 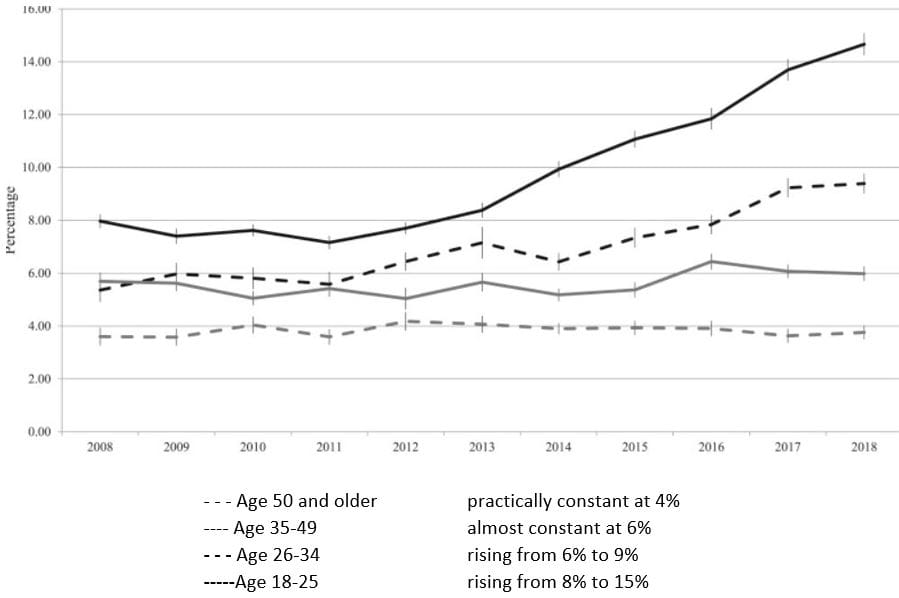 In summary the following results of the study are significant:

Starting in 2012, anxiety among the 18-25 age group rose sharply at a rate of 1% per year. Existential concerns are one of the most mentioned reasons for anxiety as the potential loss of jobs due to digital transformation and automation has become a highly publicized issue. In contrast a new elite of exceptionally talented and highly salaried  individuals has emerged, causing anxiety among those not fit to achieve education in AI-related topics.

The anxiety problem in mathematics

Designing and modelling AI-Neural Networks (ANNs) and Deep-Learning Algorithms requires exceptional skills in mathematics, a discipline many students have difficulty in mastering. The impact of ‘maths-anxiety’ in performing mathematics-related activities has been addressed in recent surveys. According to these studies, individuals with maths-anxiety do not necessarily lack ability in mathematics. Rather, they cannot perform to their full potential due to the interference of their anxiety. Maths-anxiety manifests itself in a variety of ways, including physical, psychological, and behavioural symptoms, which can all disrupt a student’s mathematical performance. Results from PISA (Program for international Student Assessment) indicate that students experiencing a high maths-anxiety score significantly lower than students who do not have maths-anxiety.

Machine Learning (ML) is one of the most promising career opportunities in the STEM (Science, Technology, Engineering, Mathematics) corporate environment. Educational offerings in ML, ranging from formal university courses to interactive on-line courses and individual coaching, have formally  ‘exploded’ in recent years. Yet many future software developers are struggling to learn the essential skills as knowledge and comprehension of mathematics is mandatory. Machine Learning theory is a field that intersects statistical, probabilistic, computer scientific and algorithmic disciplines by learning iteratively from data, discovering hidden insights which can be used to build intelligent applications. To get good results and to grasp the inner workings of the algorithms a thorough mathematical understanding is necessary.

Why mathematics is important

Since the 17th century, mathematics has been an indispensable adjunct to the physical sciences and technology, and in more recent times it has assumed a similar role in the quantitative aspects of the life sciences. In his book ‘History of Western Philosophy’, famed philosopher, mathematician and Nobel laureate Bertrand Russell writes:

“Mathematics, rightly viewed, possesses not only truth, but supreme beauty, a beauty cold and austere, like that of sculpture, without appeal to any part of our weaker nature, without the gorgeous trappings of painting or music, yet sublimely pure, and capable of a stern perfection such as only the greatest art can show. The true spirit of delight, the exaltation, the sense of being more than Man, which is the touchstone of the highest excellence, is to be found in mathematics as surely as in poetry”.

Claudia Zaslavsky, an American  mathematics educator who died in 2006, [41] contended that maths has two components. The first component, commonly focused on in many schools, is to calculate the answer. The second component is to understand the mathematical concepts that underlay the problem being studied. “… and in this respect studying mathematics is much more like studying, say, music or painting than it is like studying history or biology.”

Following this line of thought, one must distinguish between the application of mathematics in AI-research and the development and engineering of AI-products and AI-services. Only a few possess the talent, intellectual capacity and the passion necessary to advance and excel in AI-research. The exceptionally high salaries paid to these individuals should not cloud the fact that being educated in the application of ML tools stipulates a mindset of specialized, narrow knowledge.

STEM vs. Humanities and Liberal Arts

From the time they are in grade school students are told that studying STEM subjects  is a prerequisite for a successful and meaningful career, while studying Humanities and Liberal Arts lacks the skills necessary for today’s modern work force. This mindset can be traced back to the early 2000s when U.S. students were found to rank significantly lower on standardized tests compared to those of its global competitors, namely China. This resulted in a modern-day Sputnik moment where a race to the Moon has become a race to the smartest technological advancements. For the U.S. to have a thriving economy, innovation in technology and science is mandatory. This argument resulted in the U.S. Government ‘America Competes Act’ of 2007, providing massive financial support to organisations promoting STEM subjects in education, research and development. The results of this initiative are stunning. Since 2008, at the University of Washington, for example, the number of students enrolled in STEM programs has increased 37% while the number of students studying the humanities is shrinking, with some majors down as much as 50%. STEM experts tend to focus on narrower and narrower slices of their areas of expertise while arts and humanities experts tend to focus on broad challenges facing humanity. Reducing the humanities part of the workforce is likely to backfire. For example, treating Covid-19 induced mental health problems, the well documented lack of well-trained and experienced  psychologists is a clear indication that our educational system has become unbalanced in addressing our societal needs.

The application of ML does not require a university education

Due to the accelerating speed of scientific discoveries and related new technologies it comes as no surprise that colleges and universities are struggling to stay relevant in tech domains. A 2016 survey conducted by Stackoverflow.com found that 56% of software developers did not have a college degree in computer science or related fields. Responding to this trend, Google has launched two ‘Career Certificate’ courses for entry-level positions in the ML domain. About 85% of the 630’000 enrolled students rated the courses with top 5-star reviews. Based on this success Google is about to launch a new class of  ‘Career Certificates’ that require no previous education in ML. Kent Walker, Google’s senior vice president of global affairs, has posted the following information: “In our own hiring, we will now treat these new ‘Career Certificates’ as the equivalent of a four-year degree of similar scope.” With this decisive step, Google has effectively replaced four-year college degrees with a lean 3-to-6-month on-line program that only takes about 5 hours a week to complete at a cost of about USD 300-. This pilot project is likely to define a new standard in employee training with potentially far-reaching implications for the entire field of STEM education. As corporations are struggling to keep their workforce up-to-date, balancing college and university education with the demands of life-long-learning vis-à-vis the growing complexity of AI-focused products and services, humanity issues need to be reconsidered as well. Personality development, building the foundation for a transdisciplinary workforce, liberated from the knowledge silo-thinking of nerds is urgently needed.

Creative thinking drives progress not only in the liberal arts but also, and perhaps especially so, in the STEM environment. Creativity is expected to become more valuable than technical skills as artificial intelligence outpaces human cognition. Fostering creative thinkers must become a primary focus of educators. Expanding the horizon of an individual’s awareness, the study of humanities must resurge as cognitive skills to solve specific technical problems gradually become automated. STEM’s major focus on engineering new technology is based on scientific data analysed with mathematics. Humanities’ major focus is based on the understanding of human behaviour through the exploration of history, art and ethics. Combining both worlds under the umbrella of creativity will reduce anxiety caused by the feeling of being paralyzed  in mastering life due to a one-sided, just technology focused mind.