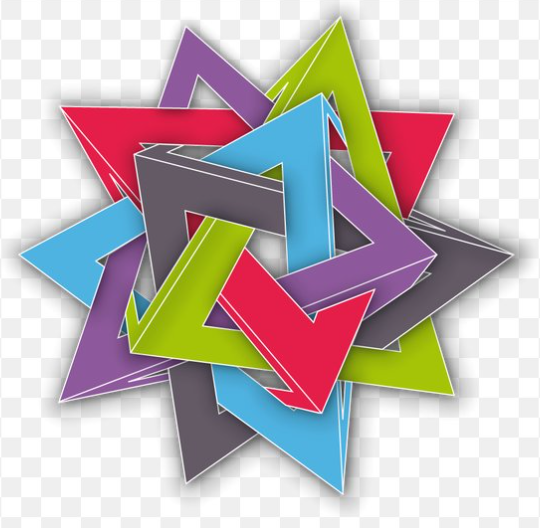 Intelligence has been defined in many ways including: the capacity for logic, comprehension, self-awareness, learning, emotional knowledge, reasoning, planning, critical thinking, and problem solving. The aim of artificial intelligence (AI) is to augment or substitute biological intelligence with machine intelligence. The rising complexity of achieving this goal calls for a transdisciplinary approach integrating various research areas. So far AI supports machine reasoning, natural language processing, speech – and object recognition, human-computer interaction and emotion sensing. To realise these applications, Artificial Neural Networks (ANNs) and Machine-Learning Algorithms (Deep Learning) are applied to detect deviations from a given norm or to predict outcomes based on the analysis of historic data. However, this mathematical approach to simulate the human brain with artificial neurons is reaching its limits, both in terms of prediction quality as well as cost and time involved in processing huge sets of training data. To overcome some of these limitations, neurobiology maps the connections between biological neurons to enable the computational modelling of brain activity. Simulating the functionality of a mouse-brain represents a recently achieved milestone in neurobiology. In addition, a new generation of brain-scanning devices, observing the behaviour of individual neurons under various test conditions, offers new insights into the functionality of the human brain. Finally, the association of philosophical and psychological issues correlating human behaviour with brain activity has given birth to Neurophilosophy, a relatively new academic discipline. Observing and modelling a child’s progress in learning and memorizing as well as testing the evolvement of consciousness provide a third way to unlock the complexity of brain functionality. In summary we can envision AI-research as an interconnected, transdisciplinary triangle depicted by the following graph: 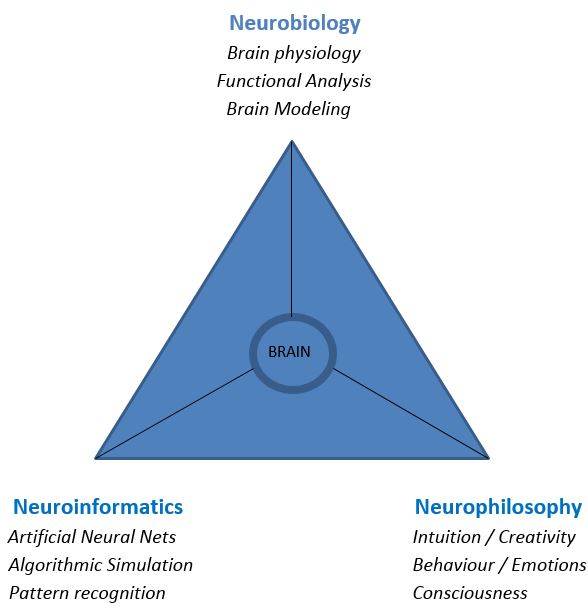 Distinguishing between Inter- and Transdisciplinary-Research

The need to interface Neuroinformatics with Neurobiology

Back in 2017 Denis Hassabis of Alphabet’s Deep Mind suggested intensifying the cooperation with Neuroscience to advance AI towards Artificial General Intelligence (AGI). Now, three years later, Artificial Neural Networks (ANNs) have made significant progress both in respect to diversity as well as quality. New brain-inspired network architectures and algorithms have evolved. To overcome the ‘black-box-syndrome’, tools are being developed to analyse the feasibility of a network-design to solve a specific problem. Geoffrey Hinton, the highly regarded ‘father’ of ANNs, suggests that the workings of the brain cannot be deduced solely from the details of brain imaging studies; instead, this data should be used to build and refine algorithms. In last year’s Conference on Neural Information Processing Systems (NeurIPS 2019) Yoshua Bengio, one of the three pioneers of deep learning and Turing Award winner, delivered a keynote speech that shed light on possible directions that can bring us closer to human-level AI. He is one of many scientists who are trying to move the field of artificial intelligence beyond predictions and pattern-matching towards machines that think like humans. “Some people think it might be enough to take what we have and just grow the size of the dataset, the model sizes, computer speed—to just get a bigger brain,” Bengio said in his opening remarks. While, arguably, size is a factor and we still don’t have any neural network that matches the human brain’s 100-billion-neuron structure, current AI systems suffer from flaws that will not be fixed by making them bigger. Current deep learning systems “make stupid mistakes” and are “not very robust in handling changes in distribution,” Bengio remarked. But despite their limits, they have created many useful applications, especially in the domain of computer vision. AI algorithms now perform tasks like image classification, object detection and facial recognition with accuracy that often exceeds that of humans. However, it is widely accepted that the lack of causality is one of the major shortcomings of current machine learning systems. Bengio believes that future deep learning systems that can compose and manipulate named objects and semantic variables will help in moving us toward AI systems with causal structures, simulating human-level AI.

Collaboration between Philosophy and Neurobiology, the emergence of Neurophilosophy

The collaboration between neuroscience and philosophy is relatively new. Only a few decades ago philosophy averted empirical perspectives while neuroscience took little interest in philosophy.

However, within recent decades science has begun to take an interest in consciousness as a subject for serious scientific pursuit. In the earliest part of the 20th century one had behaviourism which completely discarded and rejected mental terms as improper for scientific study. Then came functionalism in the middle of the century, leaving emotions out in the cold. In terms of understanding the human mind and its complexity, it was also an unsuccessful pursuit. It was the combination of neuroscience becoming involved in studying consciousness and philosophy becoming more open to studying natural sciences, including neuroscience, that brought about a theoretically more promising environment leading to the emergence of neurophilosophy. Many of the questions raised by modern neuroscience are similar to the ancient philosophical questions such as free will, what it is to be a self, the relation between emotions and cognition or between emotions and memory. One of the main issues in neurophilosophy is the question of methodology. How can we link empirical data, so-called facts as obtained in neuroscience, to the concepts and their meaning as dealt with in philosophy? How can we relate neuroscientific data concerning consciousness to the philosophical concept of consciousness and, vice versa, how can we translate the latter into experimental designs to test it empirically? This neurophilosophical gap needs to be bridged if neurophilosophy is to succeed in the long term. Thinking that artificial intelligence works in the same way as a human brain can be misleading and even dangerous, says David Watson of the Oxford Alan Turing Institute. “No doubt, DNN algorithms are powerful, but to think that they ‘think and learn’ in the same way as humans do would be incorrect. Neural nets are ‘myopic’. They can see the trees, so to speak, but not the forest. For example, a human can say ‘that cloud looks like a dog’, whereas a DNN would say that the cloud is a dog. It would be a mistake to say that these algorithms recreate human intelligence”, Watson says. “Instead, they introduce some new mode of inference that outperforms us in some ways and falls short in others.”

From Transdisciplinary Research to Collective Intelligence to Creativity

Transdisciplinary collaboration has a big potential to speed the rate at which research can contribute to the understanding of a problem, accelerating the pace of new discoveries and expanding human knowledge. It provides a good framework supporting collective intelligence. Transdisciplinary collective intelligence is a new mode of information gathering, knowledge creation, and decision-making that draws on expertise from a wider range of organizations (academic or non-academic) and collaborative partnerships. The evolution of large-scale collaborative eﬀorts between researchers from diverse disciplines was spawned from the necessity to increase eﬃciency in solving complex problems that require knowledge from multiple disciplines. Realizing the beneﬁts from collaborative research, numerous initiatives have been launched to develop transdisciplinary research groups and establish new centres of excellence.

In the context of transdisciplinary teamwork, transdisciplinary creativity is a relatively new approach to knowledge creation. Transdisciplinarity refers to bringing together individuals of different backgrounds and specializations supporting cross-fertilization of knowledge. Applying these skills requires a mindset for achieving a common goal beyond the limits of individuality. It is generally accepted that the core-skills of a transdisciplinary researcher can be described as follows:

Effective teamwork implies synergism between all team members that are willing to combine and recombine their expertise in order to achieve a common goal. In this respect, teams are effective at generating innovation because they bring together far more concepts and bodies of knowledge than any one individual can. Diversity of skills and experience promotes such collaborative relationships adding significant value to innovative results. Complex problems require transdisciplinary teams to envision future solutions and to promote collective intelligence as a source for new knowledge.

Due to its complexity, advancing human-level AI requires a transdisciplinary approach. Collaboration between Neuroinformatics, Neurobiology and Neurophilosophy is fundamental to overcome the ongoing expansion of knowledge-silos we can observe in traditional university research settings. The availability of new broadband communication and  virtual-reality simulation tools support the effort to establish new, highly efficient challenged based research teams, revolutionizing knowledge creation.