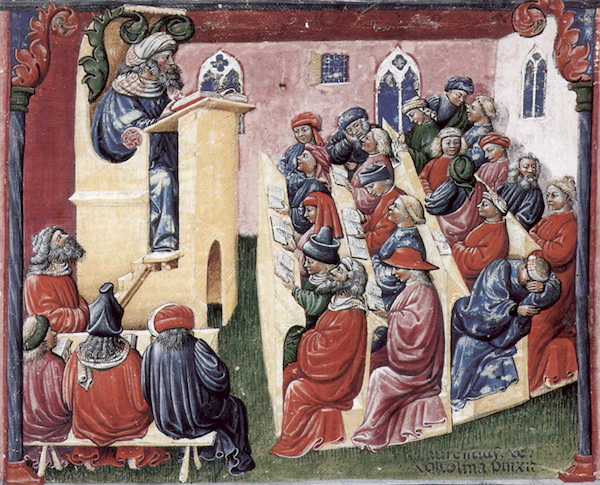 Teaching at the University of Bologna around 1300. Picture Credit Wikipedia

To provide measures for better education on a global scale, the ‘Education 2030 Framework for Action’ was adopted by 184 UNESCO Member States on 4 November 2015 in Paris. The right to education begins at birth and continues throughout life. To complement and supplement formal schooling, broad and flexible lifelong learning opportunities should be provided through non-formal pathways with adequate resources and mechanisms and through stimulating informal learning, including the use of ICT and AI. Following this spirit, this year’s International Conference on Artificial Intelligence and Education ended in Beijing on May 18, 2019. The conference was jointly organized by the UNESCO, the China National Commission for UNESCO and the Beijing municipal government. Around 500 representatives from more than 100 countries and 10 international organizations attended the event and passed the Beijing Consensus as a guiding document for the future development of global education. Entitled ‘Planning Education in the AI Era: Lead the leap’, the conference provided a unique platform for representatives from countries and international organizations including leaders from the AI industry and academia to share their ideas and practices on a wide range of topics to discuss the future of education and the promotion of educational equality and inclusiveness. As an outcome of the conference, the Beijing Consensus calls on countries to introduce policies to promote the integration of AI with education and to boost AI’s role in building open and flexible educational systems, facilitating universal accessibility to lifelong learning opportunities. The Consensus proposes that lifelong learning systems should be underpinned by AI platforms and data analysis techniques. It also stresses the need to support research on frontier issues related to AI technologies, as well as exploring effective strategies and practices to facilitate educational innovation.

The acquisition of knowledge and the impact of emotions

Cognitive psychologists and neuroscientists both provide evidence supporting a distinction between declarative and procedural knowledge. Declarative knowledge refers to factual knowledge such as knowing: “World War II started in 1938”. In contrast, procedural knowledge refers to process related knowledge such as knowing how and why World War II occurred. Apart from these types of knowledge, psychologist Daniel Goleman makes the point that there exists a third category named affective knowledge. Affective knowledge means managing one’s own emotions and the inner potentials for positive relationships. These inner potentials further motivate us to engage more in some activities than in others. Emotional experiences are ubiquitous in nature and important and perhaps even critical in academic settings, as emotion modulates virtually every aspect of cognition. Tests, examinations, homework, and deadlines are associated with different emotional states that might encompass frustration, anxiety, and boredom. The usage of computer-based multimedia educational technologies, such as intelligent tutoring systems (ITSs) and massive open online courses (MOOCs), which are gradually replacing traditional face-to-face learning environments, is increasing. This may induce various emotional experiences while learning. Hence, emotional influences should be carefully considered in the design of educational courses to maximize learner engagement as well as to improve learning and long-term retention. Emotional experiences appear to be remembered vividly and accurately, with great resilience over time, resulting in a high retention rate of learning.

From MOOCs to Chatbots

In recent decades, the number of students per lecturer has constantly risen. Large-scale lectures at universities with more than 100 students per lecturer and massive open online courses (MOOCs) are increasingly becoming the default learning scenario. Consequently, individualized support provided by lecturers is nearly impossible and students are unable to engage in effective, personalized learning. Several studies have revealed that this lack of individualized support leads to weak learning outcomes, high dropout rates and dissatisfaction.

Chatbots have the potential to solve this problem considering the widespread user-acceptance in existing business-applications such as customer service or information acquisition. Chatbots are computer programs which attempt to simulate conversations of human beings via text or voice interactions. According to this definition, chatbots comprise all kinds of software enabling humans to have a conversation with a computer. This includes chatterbots, conversational agents, artificial conversational entities and virtual assistants such as Amazon’s Alexa or Google’s Home. Defining the functionality of chatbots, one must distinguish between retrieval-based models and generative-based models. Retrieval-based models use a repository of predefined responses and an algorithm to pick an appropriate response based on the input and/or context of the inquiry. This algorithm can be very simple, such as a rule-based answer matching the inquiry. Generative-based models do not reply with pre-defined responses, instead, they generate responses out of the input with the help of machine learning techniques. Both approaches have advantages and disadvantages. On the one hand, retrieval-based methods are easier to build and do not make grammatical mistakes, on the other hand, they are unable to handle unseen cases where no predefined response exists.

From Chatbots to Avatars

Chatbots applied in education promise to have a significant positive impact on learning success and student satisfaction. A small number of studies have already shown successfully implemented chatbots in learning scenarios. For example, the University of Georgia created a chatbot based on IBM’s Watson platform called ‘Jill Watson’, which was developed specifically to handle forum posts by students enrolled in a computer science course. As a result, students were more engaged in the course, and wished that they had the same opportunity in other courses as well. Especially in large-scale learning scenarios at universities, chatbots have the potential to compensate the insufficient individual support of lecturers which is one of the main factors that the learning retention rate of MOOCs is less than 10%.

Artificially intelligent, generative-based chatbots allow the user to be engaged in a much more natural way, similar to a real human-to-human conversation. Instead of picking a response from a pool of pre-made answers as applied in retrieval-based chatbots, generative-based chatbots can learn over time, based on real inputs from the users in terms of right and wrong answers previously recorded. Generative-based chatbots include contextual information to increase productivity and improve usability. One way of including context into chatbot responses is to capture the emotional status of students. Emotions such as anger, frustration, fear and joy can be recognized through vision or voice, leading to a more individualized learning experience. Today’s chatbots rely on voice communication by applying natural language processing (NLP) to analyse language input and natural language generation (NLG) to generate language output. Recent progress in voice modulation offers a personalized voice-response that adapts to the users’ emotional state.

Complementing generative-based chatbots with screen-based, human-like Avatars acting as virtual teachers further improves student engagement as empathy between the Avatar and the student substitutes the relationship with a real teacher. Recognizing a student’s emotional response through emotion sensing leads to empathy which is crucial in motivating students to learn. Designers of these Avatars must understand the nuances of human emotions, understand the physical and behaviour manifestations of those emotions and then develop mechanisms for the AI system to mimic those behaviours.

Human-centered intelligent systems understand the expectations and needs of humans and in return help humans to understand them. Concerned with the potential threat to skilled labour caused by Artificial Intelligence, Joseph E. Aoun, the current president of Northeastern University, has written the book ‘Robot-Proof: Higher Education in the Age of Artificial Intelligence’. He proposes a framework for a new discipline labelled ‘humanics’, a model of learning that “enables learners to understand the highly technological world around them and that simultaneously allows them to transcend it by nurturing the mental and intellectual qualities that are unique to humans — namely, their capacity for creativity and mental flexibility”. He proposes three skills to be taught as part of the humanics curriculum:

Technological skills:  As digital citizens, we are living in a world imbued with technology, but many of us don’t necessarily understand how software and hardware work. Although not everyone needs to code, enriching our technological skillset broadens our horizons and empowers us to be creative.

Data skills: The 21th century is marked by the explosion of data, thus earning the title, the “Big Data Era”. The enormous amount of data, fast processing power, and advanced algorithms enable us to build models and explore correlations by stimulating interdisciplinary studies.

Human skills: Human skills facilitate engagement with others and enhance our human capacity for love and grace. In the global community, we need to interact with people who have different backgrounds and perspectives. Therefore, embracing diversity at schools and workplaces is essential for us to build human skills and to advance the development of our personality.

As science continuous to advance in high gear, the pace of knowledge-generation requires a revamp of our educational system. Human-centered AI is crucial in supporting humans in lifelong learning. Both the content to be taught as well as the technological means to educate will disrupt the current business model of our educational infrastructure whose foundation goes back to the mid-ages. Early universities were rigid and heavily influenced by Aristotle’s notion of the sciences and learning. However, scholars began to experiment with new ways of learning and experimentation. Disciplines began to break away from a heavy humanistic orientation which led to the divergent development of the sciences from the humanities. As industrialization became a key driver for countries’ economic success and power, class-room oriented education provided the human capital of future engineers and scientists. Today’s global quality rating of educational institutions stipulates intense competition to attract the best talents and the biggest research budgets. The costs of getting a degree from a top-rated university are staggering as documented by the rising rate of student loans. The application of AI in education will improve the quality and retention rate and significantly lower the cost, a typical scenario for well-funded start-ups and spin-offs to incubate a new age in lifelong personalized education.