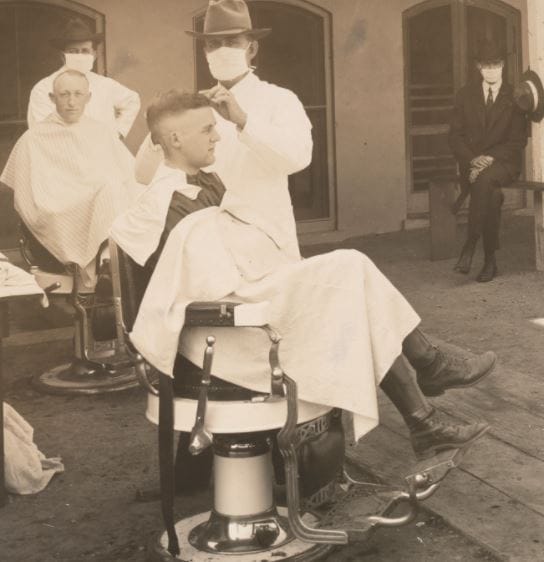 Barbers in California wearing masks during the Spanish Flu

While the Covid-19 pandemic still rages in many regions of the world, there is hope that new vaccines will help to stem the tide of this this life- and society-threatening virus. Covid-19 is not the first pandemic striking mankind , in fact the Spanish Flu, which raged in 3 waves  between 1918 and 1920,  infected around 500 million people or about 30% of the world’s accountable population at that time. Estimates as to how many infected people died vary greatly, but the flu is considered to be one of the deadliest pandemics in history. A 2005 estimate put the death toll at 50 million including 675’000 in the US. Even in areas where mortality was low, many adults were seriously incapacitated. Healthcare workers could not tend the sick and gravediggers could not bury the dead because they too were ill. Oxygen ventilators to treat the critically ill did not exist. However, communication procedures for alerting public health authorities on the spreading of infections did exist and actions taken were remarkably similar to the ones applied against Covid-19 such as frequent handwashing, quarantining, social distancing, closing schools, theatres and places of worship, limiting public transportation and banning mass gatherings. Wearing face masks became common though there were debates as to their effectiveness. According to medical historians, the decline in deaths from the flu could be partly attributed to mandatory mask-wearing policies. The first wave of the 1918 pandemic occurred in the spring and was generally mild. The sick, who experienced such typical flu symptoms as chills, fever and fatigue, usually recovered after several days, and the number of reported deaths was low. However, a second, highly contagious wave of the flu appeared in the fall of that same year. Victims died within hours or days of developing symptoms, their skin turning blue and their lungs filling with fluid that caused them to suffocate. “The end of the pandemic occurred because the virus encircled the globe, infecting a sufficient number of people that the world population no longer had enough susceptible people for the strain to become a pandemic once again,” says medical historian J. Alexander Navarro. “When you get enough people who get immunity, the infection will slowly die out because it’s harder for the virus to find new susceptible hosts.”

According to the World Health Organization (WHO), about 8.5% of the world’s population of 7.8 Billion are currently infected or have died because of Covid-19, compared to the 30% of individuals who were infected or died due to the Spanish Flu. Besides better medical equipment, several technological advancements have helped to contain the Covid-19 virus so far:

In summary internet connectivity and the application of AI have so far played a major role in preventing a global disaster like the Spanish Flu. Yet the Covid-19 pandemic has left serious scars both individually as well as economically. Mental health problems caused from isolation, the massive cutback in mobility or the blocking of cultural and information events have left a broad spectrum of problems to be solved for bringing humanity back to normal. Above all the massive rise of unemployment due to corporate closings severely threatens the foundation of our socioeconomic balance. While home-office or virtual events are both providing means to improve information and task efficiency, humans – according to the long history of our genetic evolution – require physical and social connectivity supported by our body-enforced sensory system such as vision, smell or touch. Hence, virtuality cannot replace reality.

AI is no longer an issue for mathematicians. While Artificial Neural Networks (ANNs) and new algorithmic concepts continue to provide new ways to resolve problems offering and supporting knowledge-generation and solutions across many scientific disciplines, AI has become an intradisciplinary science that includes brain research and behavioural psychology to understand and augment human intelligence. With the arrival and spread of the Covid-19 pandemic, monitoring health-indicators in real-time has become  an important contributor to combat future pandemics. Next to improving hardware performance to learn from the massive data collected with ANNs, new low-power neuromorphic systems for local intelligent sensing applications like body temperature or blood sugar will provide individual health-support, uncoupled from communication intensive cloud applications. Together with the newly experienced freedom to physically meet without restrictions, organisational concepts that worked extremely well prior to the pandemic will support us in getting back to normal. ‘High-Performance-Teams’, defined as a group of people with complementary talents and skills, aligned with and committed to a common purpose and who consistently show high levels of collaboration and innovation guided by a democratic leadership style, will find a rapid revival. Collectively sharing norms and values , these teams have a strong sense of accountability for achieving their goals. While home-office concepts can be efficient to handle administrative tasks, the physical integration in one location and the efficiency of solving problems with creativity and innovation as illustrated by high-performance-teams are in line with our evolutionary development as social individuals.

From Creativity to Innovation

Although creativity is often associated with the arts, it is a vital form of intelligence that drives people in many disciplines to discover something new. Creativity can be found in every area of life; from the way you decorate your residence to a new way of understanding how a biological cell works. Although psychologists have offered several definitions of creativity, probably the most useful definition is the one recently adapted by the U.S. Patent Office to decide whether an invention can receive patent protection. The first criterion is originality. The idea must be unique. Albert Einstein’s special theory of relativity certainly satisfied this criterion. No other scientist came up with the idea. The second criterion is usefulness. The idea should be valuable for solving a problem. The third and last criterion is surprise. The idea should be surprising, or at least nonobvious (to use the term used by the Patent Office). For instance, a solution that is a straightforward derivation from acquired expertise cannot be considered surprising even if it were original. When applying these three criteria, it is critical to recognize that originality, usefulness, and surprise are all qualitive rather than quantitative attributes of an idea. For example, someone who reinvents the wheel is producing a useful idea, but the idea has zero originality and hence no creativity whatsoever. Similarly, someone who invented a parachute made entirely out of reinforced concrete would get lots of credit for originality—and surprise, but none for usefulness. Hence it is the combination of all three criteria that need to be met to qualify as innovation.

Human innovations are contextualized by social connections and relationships. Neural networks and AI programs do not understand or incorporate outside context. They are unable to adjust to social norms and interactions beyond the realm of their specific purpose and data set. In other words, they lack social intelligence which is the bedrock of human creativity. Anton Oleinik, professor in the Sociology department at Memorial University of Newfoundland,  argues that artificial neural networks are structured in a way that limits the possibility that they will ever have true artificial creativity. His analysis provides further evidence that AI will replace repetitive tasks that humans are not particularly skilled at to begin with. Even as AI moves into creative fields, it is still only doing the work of recommending ideas to a human designer, who makes the final decision how to present a new product or service. Neural networks are machine learning algorithms composed of layers of calculations that excel at ingesting vast amounts of data and finding every pattern within them. They fundamentally rely on statistical regression–which means that while they are good at identifying patterns, they fail miserably to anticipate when a pattern will change, let alone connect one pattern to an unrelated pattern which is a crucial ingredient in creativity. Intelligent machines may come up with novel ideas, but they may not be valuable ideas because value is a collective agreement, dictated by groups of people. In other words, they lack social intelligence, which is important for creativity since “innovations are often embedded in social connections and relationships,” Oleinik says. As a result, he thinks that because neural networks are inferior to humans when it comes to identifying and interpreting symbols, acting socially and making predictions, he doubts that neural net-powered artificial creativity will ever be able to match human creativity. “Creativity is hardly possible without one’s capacity to think metaphorically, to coordinate proactively and to make predictions that go beyond simple extrapolation,” Oleinik argues.

We are experiencing the paradox of stock-markets reaching record-highs, partially due to the AI-support in providing new vaccines, reducing the destructive impact of the pandemic – while in contrast, the western economy suffers huge losses as millions of individuals lose their jobs as a result of cost-cutting exercises induced by digital transformation processes  and the application of AI, replacing humans with a new generation of intelligent robots, for example. To heal the scars left by this crisis and to restore trust in our democratic culture we, above all, need a creative mindset of solving problems by fostering the cooperation between humans and intelligent machines. We need creativity and innovation solving the world’s most pressing problems such as climate-control, unemployment, fair distribution of wealth, health, personalized education or the protection against the destruction of our personal integrity and malicious attacks against our socioeconomic infrastructures. While we have the tools and knowledge necessary to bring our society back to a prosperous future, we, above all,  need strong and effective regulatory, government enforced boundaries to prevent a societal collapse.