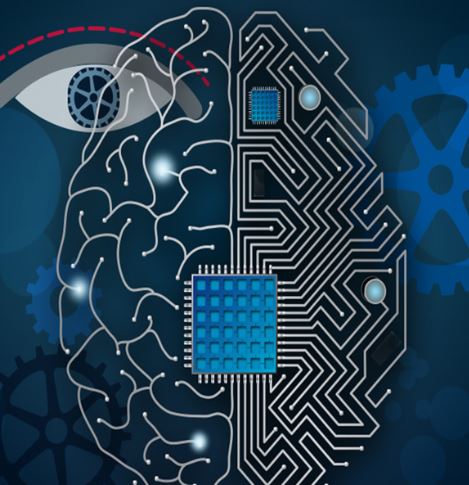 There are few areas of interest that get as much media attention as Artificial Intelligence (AI). We are continuously fed with information about new discoveries and achievements in a global race to achieve human-level intelligence. While there is widespread speculation by thousands of experts when this event will arrive, the discussion continuous as to what intelligence really implies and how other human characteristics, such as consciousness or reasoning, can be represented by intelligent machines. That our brain represents the source to answer these questions is widely accepted, but we are tied up in a mental ‘perpetuum mobile’ of thinking about our capacity to think. The following represents a thought model for discussing the impact of technology replicating the entire functionality of the human brain with a machine beyond intelligence. So far, this scenario is mostly covered by science fiction of humanoid robots. However, as scientific progress continues to accelerate, the questions looms how humanity will adapt to such an evolutionary milestone.

The Evolution of the Human Brain

Beginning with our ancestors represented by early humans, chimpanzees and bonobos, the evolution leading to Homo sapiens has undergone a substantial change in brain size and brain organization. As a result, modern humans display striking differences to our ancestors in respect to cognition and linguistic expression, for example. The changes that occurred in the evolution of Homo sapiens can be analysed by reconstructing the neural and cognitive traits of our last common ancestors and comparing these with our modern human version. The last common ancestor had a brain of approximately 300–400 g compared to today’s human brain of about 1’500 g. Yet the smaller brains of our ancestors already displayed several unique genetic stages of development, anatomical organization and biochemical functionality. These neuroanatomical substrates contributed to the enhancement of behavioural flexibility and social cognition. With this evolutionary history as a roadmap, the modern human mind and brain may be conceived as a mosaic of traits inherited from a common ancestry, along with the addition of evolutionary adaptations within particular domains defined by climate or natural resources, for example.

Culture as a means for human adaptation

In 1845, Sir John Franklin, a Fellow of the Royal Society and experienced Arctic traveller, undertook a large, well-equipped expedition to find the Northwest Passage. His ship was ice-bound for two winters, and the entire crew of 129 perished, mainly from starvation and scurvy. Yet the rich animal resources of the region where these men died have allowed the Central Inuit (Eskimos) to survive and raise their children for at least 700 years. Why couldn’t the British find enough food? They starved not because they lacked intelligence but because they did not have the necessary local knowledge, for example for building tools from bones to hunt. Moreover, two years was too short to acquire and adapt it. Humans have survived because they are good at learning from each other. This ability allows human populations to gradually accumulate knowledge over generations that no individual human could generate alone. Such cultural adaptation may be slow when measured in human lifetimes, but it is extremely fast compared to genetic adaptation. Only humans are able to accumulate knowledge and technology that no single individual could invent. Culture supports knowledge to be shared and the ability to learn culturally raises the average fitness of a population from one generation to the next. Today’s exponential growth of science-based knowledge and its application in technology significantly reduces the timespan for adaptation, something an artificial brain is better equipped to handle.

Artificial brains are man-made machines that are just as intelligent, creative and as self-aware as humans. No such machine has yet been built and to some scientist’s view artificial brains will never reach the functionality level of biological human brains. These critics argue that there are aspects of human consciousness or expertise that cannot be simulated by machines. To others it is only a matter of time until the functionality of artificial brains will be equal to that of human brains. What seems likely is that current trends in cognitive neuroscience, computing and nanotechnology will provide human-level artificial intelligence within the next 10 to 30 years. There are two broad approaches to achieving this goal: For one, conducting large-scale, biologically realistic, human brain simulations including the modelling of deep artificial neural networks, on the other hand, building novel neuromorphic computing devices that are closely modelled on neural tissue. Having reached this level of cognitive intelligence, the research community would have the tools for reverse engineering the functionality of the entire human brain. Based on the exponential growth of scientific knowledge this could happen sometimes within this century, raising the question how humans will adapt to this evolutionary milestone.

The artificial brain in a philosophical context

Along the ‘body and mind’ discussion, originally introduced by Descartes in 1641 and intensely discussed by philosophers throughout past centuries up to today, neuroscientist Prof. Antonio Damasio makes the point that artificial brains lack embodiment due to the absence of a physical body. Hence, an artificial brain will never reach the functional capacity of a human brain. With the evolvement of internet-connected biological sensors, this body-mind discussion is likely to take a new turn. The thought model under discussion has to assume that the artificial brain is connected to electro-mechanical sensors that are equivalent to the biological sensor humans are equipped with for vision, hearing, smell, touch and taste, thereby simulating a virtual body environment.  Accelerated by the Covid-19 pandemic, health has become a mayor application segment of AI, fuelling the development of intelligent body sensors that generate individual health knowledge in real-time, providing AI-based analysis and suggestions for cure in a time-frame beyond the intellectual capacity of humans.

Adapting to the artificial human brain. The standpoint of Evolutionary Psychology

In its broad sense, the term “evolutionary psychology” stands for any attempt to adopt an evolutionary perspective on human behaviour by supplementing psychology with the central principle of evolutionary biology. Evolutionary theory can aid our understanding not only of the human body, but also of the human mind. In this broad sense, evolutionary psychology is a general field of inquiry that includes diverse approaches such as the study of human behaviour adapting to change. In particular, evolutionary psychology is interested in those adaptations that have evolved in response to human adaptive problems that have shaped our ancestors’ lifestyle, for example as hunter-gatherers choosing and securing a mate, recognizing emotional expressions, acquiring a language, distinguishing kin from non-kin, detecting cheaters or remembering the location of edible plants. Evolutionary psychology thus rests on a couple of key arguments and ideas: (1) The claim that the cognitive mechanisms that are underlying our behaviour are adaptations. (2) The claim that they cannot be studied directly, for example, through observation of the brain or our overt behaviour, but have to be discovered by means of a method known as “functional analysis”. (3) The claim that these cognitive mechanisms are adaptations not for solving problems prevalent in our modern environment, but for solving recurrent adaptive problems in the evolutionary environment of our ancestors. (4) The claim that our mind is a complex set of such cognitive mechanisms.

Taking these claims into account and reflecting on how humans might adapt to an artificial brain, one can conclude that this thought model raises issues with which evolutionary psychology has not been confronted so far.

Is AI already surpassing our evolutionary capacity to adapt?

When the term ‘artificial intelligence, (AI) was first coined in the 1950s, the ultimate dream was to create a technology more intelligent than humans. Since then, AI research has experienced ups and downs. However, since the rise of machine learning – particularly deep learning – it seems that AI is finally gathering momentum, with one success story followed by another. Today, there are a variety of tasks AI systems can do better and faster than humans. Even creativity, an area long thought to be inaccessible to AI systems, is within reach. In 2017, the computer software AlphaGo Zero beat its predecessor at the Chinese board game “Go” by making a move that no human would ever have contemplated. The software was not trained with human data, but only with data from games played between computers. Entirely eliminating the need for human input was impressive in itself but move Nr.37 of the game became a landmark in AI research because it proved that an AI system could be creative. AI can map inputs to outputs but cannot reason about the decisions made. The learning and decision-making process is a black box, to us and to AI itself. The big game changer comes from Neuroscience with thousands of researchers working to explore and understand the functionality of the human brain. While AI is an important tool to analyse the massive data streams of neural activity, the aim is to reverse engineer the functionality of the entire human brain, hence creating a functional copy it.

Looking at the problems AI has introduced so far in a socio-economic context such as endangering our sense of identity through brain-hacking or the falsification of truth through fake-information, it appears that humanity is ill prepared to adapt to the next milestone of human evolution, introducing a machine based copy of the human brain. Our current philosophical and psychological inventory lacks the capacity to comprehend the impact of this achievement. Evolutionary theory suggest that on economic terms, humans will set the rate of adaptation. Yet the fight for market domination and the quest for political power and control can only be counteracted through strong ethical guidelines of self-regulation. Otherwise humanity runs the risk of becoming slaves of its own creation.