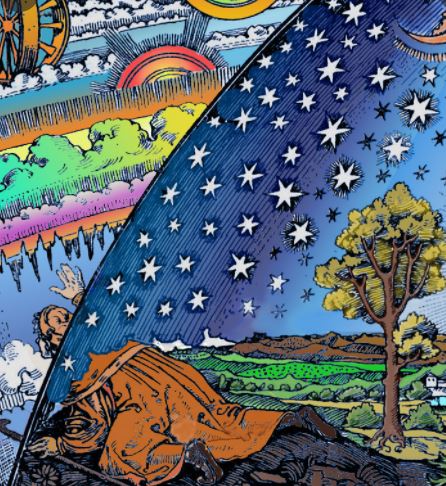 In an interview with Quanta Magazine, The Evolutionary Argument Against Reality | Quanta Magazine, cognitive scientist Donald Hoffman,  Professor at the University of California, explains why human perceptions of an independent reality are all illusions and that the world is nothing like the one we experience through our senses. He has spent the past three decades studying perception, artificial intelligence, evolutionary game theory and the brain. His conclusion is a dramatic one: The world presented to us by our perceptions is nothing like reality. Getting at questions about the nature of reality and disentangling the observer from the observed is an endeavour that reaches the boundaries of neuroscience and fundamental physics. You will find researchers trying to understand how a three-pound lump of grey matter obeying nothing more than the ordinary laws of physics can give rise to a first-person conscious experience also referred to as the ‘hard problem’ of consciousness. Conversely, there are quantum physicists, marvelling at the strange fact that quantum experiments do not define objects localized in space until we come along to observe them. Experiments show that the intuitive assumption that particles that make up ordinary objects have an objective, observer-independent existence, produce wrong answers or as the physicist John Wheeler put it, “Useful as it is under ordinary circumstances to say that the world exists ‘out there’ independent of us, that view can no longer be upheld.”

While Donald Hoffman’s interview provides an elaborate inside into three decades of reality-research, the emergence of  the interactive computer screen, driven by exponential growth in computer performance has created another form of reality. Digital Reality (DR), a generic term which differentiates between Augmented Reality, Virtual Reality, Mixed Reality and the Metaverse, gives way to a new kind of  technology-supported user-experience, which can be summarized as follows: Augmented Reality (AR) adds to your field of vision but doesn’t obscure what you can see and hear. For example, in an AR set-up, a shopper in a large store who is unfamiliar with the layout, could enter and be guided to the location of the items he is looking for. Information on price, colour options and remaining stock can be displayed as well. Virtual Reality (VR) cuts out the physical world and immerses you in an artificial environment. With your sight and hearing interacting with an avatar, you are immersed into an artificial and semi-controlled environment that you can manipulate and possibly assess the consequences of your actions. Mixed Reality (MR) is essentially a combination of AR and VR. At present MR aims to create a seamless blend of the reality presented by a person’s senses overlayed with an AR/VR combination that is context-relevant to the goals or expectations of the user. MR requires complex hardware and sensors that can recognise the user’s physical movements such as hand gestures. The Metaverse (MV), a term originally introduced by Facebook (Now Meta), extends VR by mounting headsets or binoculars, equipped with multiple small 2D screens close to your eyes. Software applications, combined with high-performance  built-in microprocessors, provide the user with new forms of extended or augmented reality with applications ranging from high-impact gaming to performing simulated operations for medical training or visual guidance for maintaining production machinery.

Contrary to Newton’s theory that light is made of corpuscles or particles, the birth of quantum physics in the early 1900s stipulated that the prevailing concept of reality was wrong. The famous double-slit experiment, proving that light can have wave and particle properties, raised fundamental questions about the very nature of reality. In the basic version of this experiment a laser beam illuminates a plate pierced by two parallel slits while the light passing through the slits is observed on a screen behind the plate. The implication is that each quantum particle appearing as light passes simultaneously through both slits and interferes with itself. This combination of ‘both paths at once’ is defined as state of Superposition. Another phenomena of quantum physics is defined as a state of Entanglement. This phenomenon describes what happens when a pair of particles interact so that the quantum state of each particle of the pair cannot be described independently of the state of the other particle. Regardless of the distance between an entangled pair of particles, measuring the state of one particle reveals information about the other, causing Einstein to label this peculiarity “spooky action at a distance.” Werner Heisenberg interpreted the mathematics of quantum physics to be such that reality does not exist until observed. “The idea of an objective real world the smallest parts of which exist objectively and independently in the same sense as stones or trees and whether or not we observe them … is impossible,” he wrote.

Some researchers have argued that the quantum world is influenced by human consciousness, giving our minds an agency and a place in the ontology of the universe. Hence, in their view, reality is defined by our minds. In the near future we will see brain organoids displaying dynamics that resemble the complex activity patterns indicative of consciousness in humans. Brain organoids are tiny, lab-grown bundles of neurons, derived from human stem cells, which display various properties of the developing human brain. In medicine, they provide much-needed biological models which enable us to research conditions, that affect brain development. Brain organoids are also valuable for basic neuroscience research. There is much to be discovered about how the brain bootstraps itself into existence from its underlying genetic instructions and about how – once built –  its circuitry supports the complex activity patterns which define brain functionality. Organoids provide a window on to developing neural circuitry that can be observed and manipulated at will. A question that looms large as this research continues is whether brain organoids can be ‘conscious.’ After all, they are made up of the same basic material as human brains—neurons and synapses—rather than the silicon logic gates of AI-systems used for algorithmic development in artificial neural networks.  If you stimulate a conscious brain with a pulse of energy, the electrical echo will reverberate in complex patterns. Do the same thing to an unconscious brain and the echo will be very simple. As brain organoids develop with similar characteristics compared to those observed in conscious human brains, we will have to reconsider what criteria we might adapt to ascribe consciousness to something made rather than born.

Philosophers have been trying to figure out what’s real and what’s not in practically all of the world’s great philosophical traditions. The answers are often not that clear and developing philosophical theories is more difficult today because the issues have become much more complicated. On the one hand, we all have a pretty decent idea of what’s real in our own lives. Whatever we can see, feel or touch seems real. Our experiences, our thoughts, our relationships — they all seem real. But sometimes our senses can deceive us, hence how do we really know what is real? Or what about our beliefs and our emotions and our values? Are those real, too? A new book by philosopher David Chalmers takes up these sorts of questions and provides some rather unusual answers. He is the co-director of the Center for Mind, Brain and Consciousness at NYU and perhaps best known for his 1996 book The Conscious Mind. His new book Reality+, makes the very interesting case that virtual realities are genuine realities, filled with just as much meaning as anything that happens in the physical world. As the technology progresses, AR glasses or contact lenses may be superseded by retinal or brain implants. A brain-computer interface would allow our eyes and other sense organs to be bypassed, affording access to a completely new range of simulated sensual experiences. Ultimately, this will transform how we live, work and think: “My guess is that within a century we will have virtual realities that are indistinguishable from the nonvirtual world,” Chalmers predicts.

Considering Donald Hoffmann’s scientific view that human perceptions of reality are all illusions or David Chalmer’s philosophical theory that simulation of a virtual world implicates a new reality – we have no choice but to resort to common sense as our basic ability to perceive, understand, and judge along a mindset that is shared by nearly everybody. Historically common sense has always been closely linked to human evolution and our basic instinct for survival. It has provided the  resource for dealing with the fundamental challenges posed by reality – such as providing food or shelter or to form social communities with common interests against a hostile outside environment. Hence, Darwin’s evolutionary theory on the ‘Survival of the Fittest’ is likely to remain the reflection point for reality versus virtuality. Most likely reality and virtuality will coexist, providing tools for gaming, educating or supervising. As the invention of the wheel sparked a paradigm-shift in transportation, mixed reality (MR) carries the potential of extending our minds.