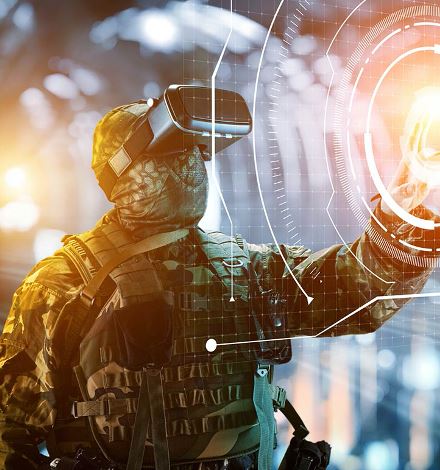 Almost 10 years ago, the US together with Israel, had built and deployed a software called Stuxnet to sabotage Iran’s nuclear program by destroying over a thousand centrifuges at uranium enrichment facilities. In terms of maliciousness and invested development resources, Stuxnet passed previous efforts by far and it also signalled a new era in cyber-warfare. The targets of the actions and their victims were no longer military or state institutions but civilians and corporations. While war scenarios have threatened humanity since humans exist, the use of cyber-warfare to paralyze hospitals, administrations and critical infrastructures without firing a single bullet is changing the political as well as the economic landscape of power. A new form of power struggle, fuelled by software, artificial intelligence and a new generation of robots, threatens democracy as an institution that fosters human rights and socio-economic justice.

The term ‘Cyber-Warfare’ can be defined as a method of conducting war that includes criminal conduct for destructive purposes. The following lists a brief  summary of the key methods used:

Espionage: Espionage refers to spying on another country or a competitor to steal secrets such as new algorithmic methods or scientific breakthroughs. In cyber-warfare, this may involve using a botnet attack to gain a foothold in a computer before extracting sensitive information.

Denial-of-Service Attack: A denial-of-service (DoS) attack involves the flooding of an organization’s website with fake requests, forcing the site to process those requests, thereby making it inaccessible for legitimate users. As a result, a DoS causes the shut-down of the organization’s operation.

Propaganda: The purpose of propaganda attacks is to control the minds or beliefs of individuals  who are fighting for a specific cause. Propaganda can be used to expose embarrassing truths or to spread lies that cause people to lose faith in their government—or even sympathize with the enemy.

Public Infrastructure Attacks: Most modern economic systems depend on computers to process information. Hacking the electrical power grid, for example, can disrupt communications, making it impossible to use services like text messaging or information exchange.

Ransomware Hacking: By breaking through encrypted firewalls, hackers can gain access to confidential data to demand money as a ransom with the threat to bring down the company’s IT-operation if the demand is not met. Professional hackers also operate on behalf of governments, extorting funds to support their weak economy.

As many of these methods threaten individual’s personal safety and emotional integrity, the ‘United Nations Universal Declaration of Human Rights’ with its mission for preventing another devastating war, needs to be reviewed regarding  its effectiveness against cyber-warfare.

The origins of human rights can be pinpointed to the year 539 BC when the troops of Cyrus the Great conquered Babylon. Cyrus freed the slaves, declared that all people had the right to choose their own religion and established racial equality. These and other principles were recorded on a baked-clay cylinder known as the Cyrus Cylinder, and its provisions served as inspiration for the first four articles of the Universal Declaration of Human Rights. Another cornerstone in Human Rights history is represented by the announcement of the Magna Carta in 1215, which introduced a raw concept of ‘Rule of Law’ and the basic idea of defining rights and liberties for all persons, offering protection from arbitrary prosecution and incarceration. The Declaration of the ‘Rights of Man and of the Citizen’, adopted in 1789 by France’s National Assembly, represents one of the basic charters of human liberties, defining the principles that inspired the French Revolution with the rights of liberty, private property, the inviolability of the person and resistance to oppression. Eventually, it took the unprecedented cruelties of World War II to propel the issue of human rights on to the global stage and into global conscience. As a result, governments committed themselves to establishing the United Nations with the primary goal of bolstering international peace and preventing conflict. The aim was to ensure that never again would anyone be unjustly denied life, freedom, food, shelter, and nationality. A Commission on Human Rights was established, drafting the 30 articles that now make up the Universal Declaration of Human Rights (UDHR). Its principles have been incorporated into the constitutions of almost all of todays 193 Member States. Since its foundation, the United Nations has adopted more than 20 principal treaties and documents that have clarified and further developed some of the basic concepts that were laid down in the original UDHR. However, in many areas of the world, conditions such as extreme poverty, war, or ecological and natural disasters have limited the adaptation and implementation of human rights. Moreover, due to the continuing process of digitally transforming the entire space of reality, the fusion of biological and digital technologies raises existential questions about what it means to be human and how to protect human dignity.

Within three decades, the structure of the global economy has changed significantly. The monopolization of the economy by a few Hi-Tech companies and the fostering of financial inequality  by competing for the ‘best brains’, results in  a race for technological dominance that has led to the formation of two mayor global power entities:

One can conclude that the theft of intellectual property or a destruction of the production facilities with the methods of cyber-warfare are mandatory for meeting the goals of maintaining or expanding power. This danger can only be averted if joint economic interests make a war senseless for all parties involved. Hence, the current trend of restricting cross-border trade of high-tech products and services or the threat of economic sanctions undermine the efforts for reducing global tension. One possible way for counteracting this trend is related to the concept of a Digital Magna Carta which complements the provisions of the existing UDHR.

There is a long list of initiatives implementing a Digital Magna Carta. Among these, the ongoing efforts by the European Commission in defining the responsibility of Internet Service providers is finally catching on, resulting in severe financial punishments levied against High-Tech Companies like Facebook (Now Meta), Google or Amazon. The General Data Protection Regulation (GDPR) is the toughest privacy and security law in the world. Though it was drafted and passed by the European Union (EU), it imposes obligations onto organizations anywhere, so long as they target or collect data related to people in the EU. The right to privacy is part of the 1950 European Convention on Human Rights, which states, “Everyone has the right that his private and family life, his home and his correspondence is respected”. To measure the public response to the concept of a Digital Magna Carta, the British Library conducted a survey where it published 500 possible provisions of a hypothetical Magna Carta for the digital age. The top provisions, chosen by 30’000 voters who took part in the survey, included responses such as: No restriction to our right of information – Allow freedom of speech – No government censorship – Internet access for all who wish to use it – No monetisation  of personal data without consent. The results of the survey indicate that individuals engaged in internet activities strongly demand adherence to ethical standards based on democratic principles and human rights. However, fighting criminal conduct that violates these principles is primarily an issue of law and punishment. Ethics cannot deter a crime in progress. Hence, regulations to deter cyber-warfare need to be adhered to by all nations with provisions of severe sanctions if applicable laws are violated.

The combination of new power entities, either supported by the monetary interests of a few High-Tech companies or the application of cyber-warfare serving governmental interests for territorial control, has created a global ‘no-win’ scenario. With its total dependence on internet communication and the electrical energy required to sustain its operation, humanity has manoeuvred itself into a situation where the sheer momentum and destructive capacity of power threatens our cultural and social achievements represented by our democratic mindset. To reap the potential benefits of scientific and technical achievements we need to drive our efforts towards a goal most individuals want: Peace. Cyber-war and injustice against the individual lead to a, literally speaking, dead-end.