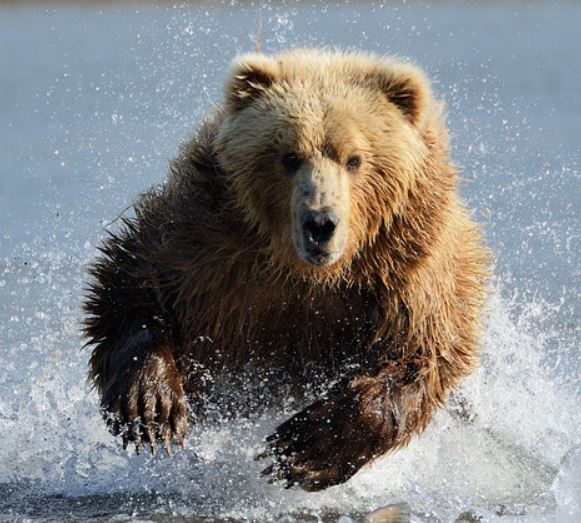 What happened when the dot.com bubble started to crash in 2000?

The dotcom bubble, also known as the internet bubble, was the result of a rapid rise in U.S. equity valuations of technology stocks fuelled by investments in internet-based companies during the late 1990s. During the dotcom bubble, the value of equity markets grew exponentially, with the technology-dominated Nasdaq index rising from under 1,000 to more than 5,000 between the years 1995 and 2000. The crash that followed saw the Nasdaq index, which had risen five-fold between 1995 and 2000, tumble from a peak of 5,048.62 on March 10, 2000, to 1,139.90 on Oct 4, 2002, a 76.81% fall. By the end of 2001, most dotcom stocks had gone bust. Even the share prices of blue-chip technology stocks like Cisco, Intel and Oracle lost more than 80% of their value. It would take 15 years for the Nasdaq to regain its dotcom peak, which it did on April 23, 2015.

The dotcom bubble grew out of a combination of the presence of speculative investing, the abundance of venture capital funding for start-ups and the failure of dotcoms to turn a profit. Record amounts of capital had started flowing into the Nasdaq in 1997. By 1999, 39% of all venture capital investments were going to internet companies. That year, 295 of the 457 IPOs were related to internet companies, followed by 91 in the first quarter of 2000 alone. The breaking point was the AOL Time Warner megamerger in January 2000, which would become the biggest merger failure in history.

With the introduction of smart-phones and tablets about 10 years ago, a new wave of technological innovations began to take hold. Application software developers began to exploit the potential of mobile Apps to provide clickable conveniences connected to cloud services. Increasing amounts of venture capital, fuelled by ‘cheap money’, began to flow back to the market, creating a ‘start-up’ culture with unprecedented intensity. Established corporations begin to realize the danger of disruption of their business models and the call for Digital Transformation, also dubbed as Industry 4.0, has become, and still is, a bonanza for consulting companies. There is wide agreement that Digital Transformation and the concept of a data-focused IT architecture to revamp existing business processes holds significant cost saving and market penetration potential.

In parallel to this convenience- and IT-driven expansion, artificial intelligence began to re-emerge, following the collapse of heavily government funded AI-expert-systems in the early 1990’s, also dubbed as ‘the second AI-winter’. Their applications were too complex, and they failed to meet expectations of a technological break-through. The innovation of artificial neural networks and associated algorithms coupled with a drastic reduction of computing costs and the ability to extract knowledge from large amounts of data with machine learning, are the main reasons why artificial intelligence has been able to recover. Moreover, investment is now quite diverse coming from enterprises, governments, academics, and venture capital. Additionally, dozens of countries have acknowledged that AI will be so important for their citizens and the growth of their economies that we now have national investment and support strategies to advance AI.

The chart of global investments in AI provies a summary (source: OECD and Crunchbase, July 2018): 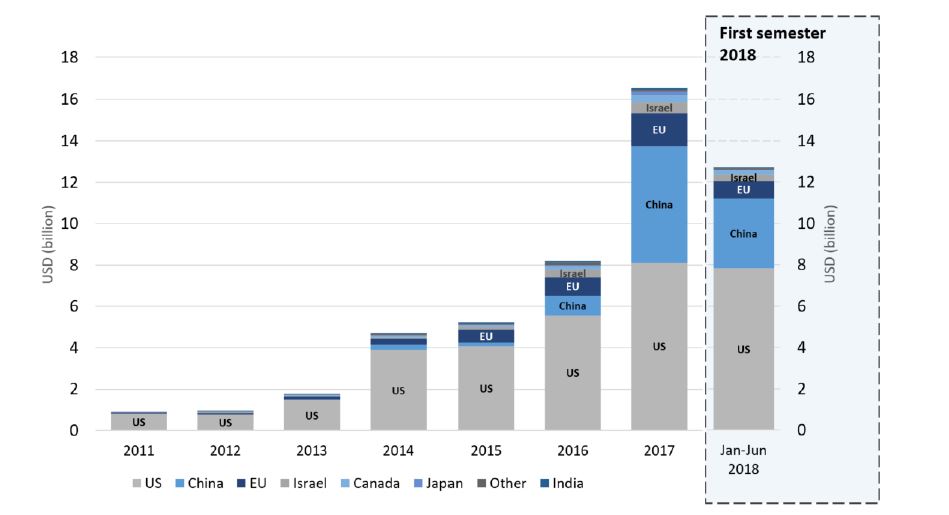 Levels of private equity investment in AI vary widely by field of application. Pretty much every major start-up sector is attracting companies that rely to some degree on AI technology. Areas with the largest proportion of well-funded start-ups include enterprise software, fintech, robotics, autonomous driving and biotech.

Autonomous vehicles (AVs) represent an increasing share of private equity investments in AI start-ups. Until 2015, AVs represented less than 5% of total investments in AI start-ups. By 2017 it had grown to 23% and by mid-2018 to 30%, in large part due to Softbank’s USD 3.35 billion investment in Cruise Automation, a self-driving car company owned by General Motors that develops autopilot systems for existing cars.

The ‘Silicon Valley’ formula for success stipulates that massive funding of innovation will eventually lead to ‘winner-takes- all’ markets. The cash-burn is used to build branding and create network effects where a service gains more value the more people use it. While Amazon, Facebook and Google have succeeded in building highly profitable monopolistic empires, reaping huge profits from advertising income and reinvesting these profits in new technologies to enhance their monopolistic position even further, the reality is that many not yet profitable but massively financed start-ups are in trouble.

SoftBank, and its USD 100 billion Vision Fund, one of the most dominant players in AI related ventures, is reportedly taking a USD 5 billion write-off because of its investment in WeWork and Uber. Uber, like many, has been able to tap readily available funds and has raised more than USD 22 billion from investors so far. Uber is not only developing the ride hailing model but also bike sharing, takeaway food delivery and autonomous vehicles. Since going public in May 2019 with an IPO price of USD 45.00, the stock has tumbled to USD 31.08 on November 4, largely reflecting the failure of its growth-at-all-costs strategy. Snap Inc, owner of the social media app Snapchat, is also in trouble as it is rapidly running out of funds – despite its USD 24 billion listing in 2017. LinkedIn, another major platform player is still losing money after its USD 26 billion purchase by Microsoft.

China’s AI investment deals fell 63 percent in value during the first half of 2019. The only bit of good news is that the overall rate of decline in investment may have slowed from Q1 to Q2. The ongoing trade dispute between the U.S. and China certainly is not helping and is going to remain an unsettling factor for some time to come. However, due to the sheer volume of activity in China’s emerging technology sectors, its global expansion and the rapidly growing number of leading AI developers, the long-range outlook for the AI-sector remains positive. Of the USD 52.6 billion of fundraising deals in China during the first half of 2019, the largest by far were AI-driven.

To summarize, AI funding in 2019 (recorded through early September) has slowed as shown by the following chart: 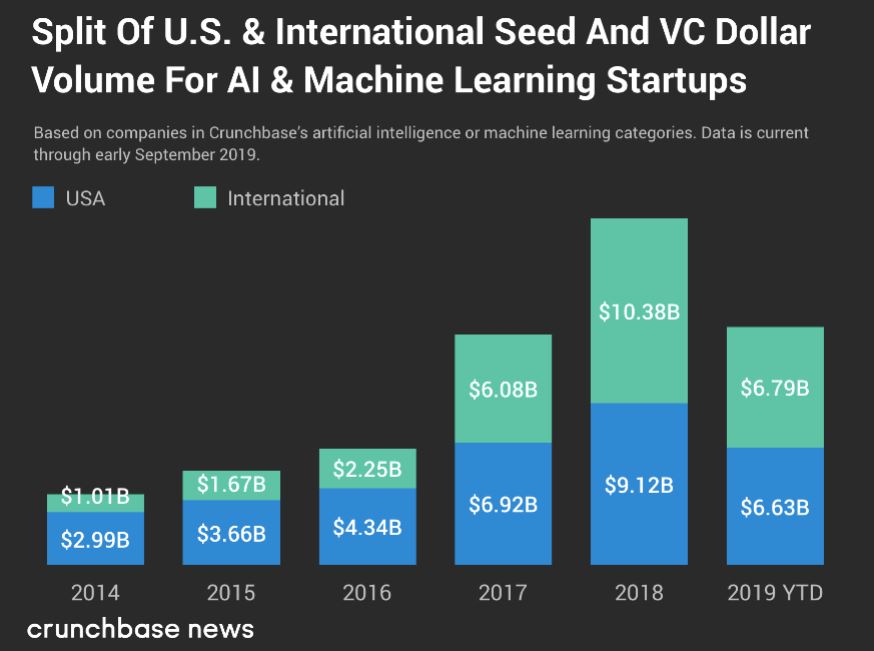 Some experts see this as a temporary effect of a maturing industry, others see it as a first sign of a downturn, mostly related to too high expectations with a new AI-winter approaching.

Can overhyped AI cause another crash?

While AI is making significant contributions to scientific discoveries and its applications in new drug deployment, manufacturing and logistics to name just a few, the value proposition for future funding might be in peril. Are we once again overpromising and underdelivering on what AI is capable of and are we going to be disappointed by the limitations of driverless vehicles, natural language processing, and AI-powered predictive analytics?

The results of IBM’s engagement in the health sector with its Watson AI-Platform and the collaboration with major hospitals have been disastrous, largely due to the problems with data quality. After billions of dollars and years spent in the development of autonomous vehicles, the awareness is mounting that the potentially irrational behaviour of humans will ground the AV vision except in a few isolated applications. Large car manufacturers pulling the plug on AV venture capital could send shockwaves through the AI industry, causing another bust with venture capitalists running for cover. If the downturn in AI investments continuous, we might experience a crash in late 2020 or early 2021 as venture capital’s expectations are more and more confronted with the limitations of ‘Narrow AI’, such as the handling of common sense or the interpretation and understanding of content.

The dot.com crash was basically the result of greed and unrealistic profit expectations taking advantage of global Internet connectivity through edutainment, infotainment and e-commerce.  Scientific research had little impact, except for the improvement of compression algorithms, enhancing the streaming of videos, images and music at high quality. The goal to reach Artificial General Intelligence (AGI) to overcome the limits of ‘Narrow AI’ is supported by our fundamental belief in scientific progress, a spiral which continues to gain momentum with no end in sight. The ongoing proliferation and diversification of AI research, expanding into Neuroscience and Behavioural Analytics, leaves ample space to reboot AI and to recover.  We might experience a valley of disappointment; however, research is in progress that will fundamentally change the application of AI. Coupled with the strategic importance governments assign to AI, we are likely to see a massive surge in research expenditures, followed by a renewed influx of venture capital, to reap the potential social and economic benefits of AI and to implement regulations against misuse.