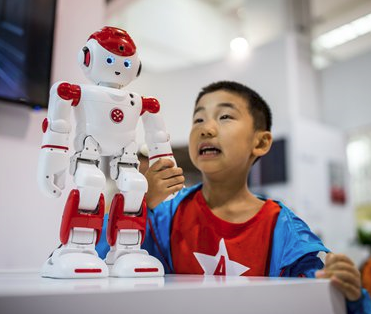 In July 2017, China’s State Council announced the “Next Generation Artificial Intelligence Development Plan” with the straightforward goal of becoming the global AI innovation hub by 2030. The Chinese government’s plan aims (a) to keep pace with Western AI technology by 2020, (b) make major breakthroughs by 2025, and (c) lead the world in AI by 2030. Earlier this month, a $2.1 billion industrial park dedicated to AI technology was announced for Beijing, as part of the country’s long-term goal to become the world leader in AI. To support this effort, Alibaba, one of the largest companies in the world -primarily due to its success as an online retailer- announced its plans to invest $15 billion in emerging technologies such as artificial intelligence, quantum computing, and the Internet of Things.

Today China has the largest mobile phone and Internet user population in the world – about three times larger than that in the US or India. Many think that the gap between the US and China is just a factor of three. It is dramatically larger than that. In China, people use their mobile phones to pay for goods, fifty times more often than Americans. Food delivery volume in China is ten times more than that of the US. It took the bike-sharing company ‘Mobike’ ten months to go from nothing to 20 million orders (or rides) per day. There are over twenty million bicycle riders transmitting their GPS and other sensor information up to the server, creating 20 terabytes of data every day. All of these Internet-connected devices will yield data that helps make existing products and applications more efficient, and enable new applications we never thought of. The more data there is available the better AI can be applied.

Tencent, next to Alibaba and Baidu the third Chinese tech giant, is provider of WeChat, processing over 1 billion requests from Chinese customers per day. WeChat originally started as a clone of Facebook’s WhatsApp but has added far more functionality in the last two years. Today WeChat is used to arrange meetings, make reservations, make mobile payments (similar to Apple Pay), provides links to on-line shopping and in some regions or cities is used as a government approved ID card. It is estimated that outside of China over 100 Million individuals and companies use WeChat on a daily basis as well.

Compared to the spending which US tech giants have been making in AI R&D, investments by their Chinese counterparts like Alibaba, Tencent and Baidu have been very modest so far:

However, based on China’s AI development plan, AI R&D spending will significantly increase over the years to come, accelerating the deployment of new AI services and products made in China.

Current examples of AI made in China

Perhaps there’s no better indicator of China’s rise in AI than the 2017 ImageNet competition, an influential AI contest where teams from across the world compete over which algorithms are superior in recognizing images. Of the 27 teams competing, more than half were Chinese-based research teams from universities or companies, and all the top performers came from China. Leading AI players like Google, who won top results in 2014, have not participated in the last two ImageNet events. But China’s dominance in the last two years of the competition shows just how much serious AI work is coming out of the country these days.

China’s tech giant Baidu is unambiguously one of the global leaders in AI research, having developed an AI system with better-than-human speech recognition performance a year ahead of any Western organization. Just as Google and Amazon are active in the US, Baidu is trying to take over the smart assistant market in China. To that end, Baidu has introduced three new smart speakers, all with very different core functions. So far these products are built for the Chinese market and are not available in the US or Europe.

Another example of AI progress comes from the Chinese face recognition startup Face++ which recently won first place in three computer-vision challenges, ahead of teams from Google, Microsoft, Facebook, and CMU (Carnegie Mellon University). Founded in 2011 by three Tsinghua University graduates, Face++ is now valued at roughly a billion dollars and boasts approximately 530 employees, up from about 30 employees in 2014. It is the world’s largest face-recognition technology platform, currently used by more than 300,000 developers in 150 countries to identify faces, as well as images, text, and various kinds of government-issued IDs.

Chinese retail giant Alibaba has developed an artificial intelligence model that has managed to outdo human participants in a reading and comprehension test designed by Stanford University. The model scored 82.44 points, whereas humans recorded a score of 82.304. The Stanford Question Answering Dataset is a set of 10,000 questions pertaining to some 500 Wikipedia articles providing a well-respected means of testing machine reading. For the first time, an artificial intelligence system scored higher than a human participant.

While many AI innovations continue to have their origin in Silicon Valley it is stunning to watch how rapidly China is adopting the potential advantages of these technologies. From the point of view of the ruling Communist Party, this creates a win-win situation: the more internet applications are penetrating people’s lives, the more the government has control over its citizens.

The upcoming culture clash on innovation

Chinese culture is a very unique accumulation of thousands of years of refinement. When China was but a land divided, devoid of morals, a man by the name of Confucius gave China three key values which are still present in the mindsets and attitudes of modern Chinese:

The Chinese have created a unique political model which is non-democratic yet one which works exceptionally well for China. Like Democracy was made with Western history and Individualist values in mind, the “Chinese Model” is engineered specifically for China’s unique historical circumstance and Collectivist values. The following table contrasts some of the differences between China’s collective and Western individualistic culture:

Imagine a world where an authoritarian government monitors everything you do, collects huge amounts of data on almost every interaction you make, and provides you with a score that measures how “trustworthy” you are. In this world, anything from defaulting on a loan to criticizing the ruling party, from running a red light to failing to care for your parents properly could cause you to lose points. And in this world, your score becomes the ultimate truth of what kind of person you are – determining whether you can borrow money, get your children into the best schools or travel abroad; whether you get a room in a fancy hotel, a seat in a top restaurant – or even just get a date. This could happen in China by 2020. It is the scenario contained in China’s ambitious plans to develop a far-reaching social credit system, a plan that the Communist Party hopes will build a culture of “sincerity” and a “harmonious socialist society” where “keeping trust is glorious.”

From a Western point-of-view this ‘big brother is watching you’ scenario violates our democratic value system. We are experiencing a cultural clash between an individualistic/democratic and a collective/totalitarian culture. One example illustrating this clash is the difference as to how data protection and privacy is handled. The Amnesty International report, ranking technology companies on the way they implement encryption to protect the human rights of their users, placed Tencent’s WeChat last out of a total of 11 companies, including Facebook, Apple, and Google. A September 2017 update to the platform’s privacy policy detailed that log data collected by WeChat included search terms, profiles visited, and content that had been viewed within the app. Additionally, metadata related to the communications between WeChat users—including call times, duration, and location information—was also collected. This information, which is used by Tencent for targeted advertising and marketing purposes, can be disclosed to representatives of the Chinese government. Unless users in China agree to this policy they cannot use WeChat.

As China has defined the goal to become the world’s leading AI power, the question looms as to what our Western democratic society can do to stay ahead of this race and to maintain our values in light of the ambitious research funding China is providing to become the global leader in AI. How can Western society cooperate with China without giving up its democratic values? Is Globalization und unrestricted trade the answer or should we go back to isolation and protectionism? These and many other questions emerge as we take China’s initiative seriously. Intelligence ‘made in China’ is likely to be more than just a service- or product offering, it could also be a cultural imperative.

Chinese culture supports a pragmatic totalitarian approach to AI. It is well conceivable that China as an economic and military power will benefit the most from the application of AI. In contrast, individualistic creativity has fueled the economic and scientific progress in Western democracies since the age of Enlightenment and Descartes’s ‘I think therefore I am’. At MIT’s Commencement in June 2017 Tim Cook, CEO of Apple Computer, said: “I’m not worried about artificial intelligence giving computers the ability to think like humans. I’m more concerned about people thinking like computers without values or compassion, without concern for consequences. That is what we need you to help us guard against. Because if science is a search in the darkness, then the humanities are a candle that shows us where we’ve been and the danger that lies ahead. As Steve Jobs once said, technology alone is not enough. It is technology married with the liberal arts married with the humanities that make our hearts sing. When you keep people at the center of what you do, it can have an enormous impact.”

As China’s influence grows we might have to reboot Western democracy to maintain our values and our cultural heritage, an issue which needs to be taken seriously. 2030 is not far away.