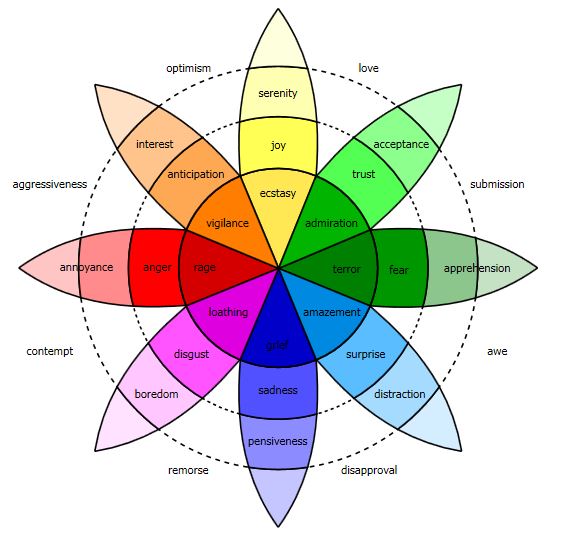 One of the founding fathers of AI, Marvin Minsky was once questioned about machine emotions and said:

Indeed, without emotions we would not have survived as a species. As our intelligence has improved as part of human evolution and its drive for survival, emotions like fear have caused our evolutionary survival mechanism to take effect. These are external causes that trigger emotions inside our brain. However, emotions can also be invoked as the result of an internal thought process. For example, finding a solution to a complicated mathematical problem, could trigger happiness. It may be a purely introspective action with no external cause, but solving it still triggers emotions. Simulating emotions triggered from external stimuli like joy, sadness, surprise, disappointment, fear, and anger could be invoked with interactions through written language, sensors, and so on. We have reached the point where computational methods can be applied to process the expression of emotions that occur with human interaction. However, this does not imply that intelligent machines have emotions.

There are different theories to explain what emotions are and how they operate. The following discusses just a few of these theories. Evolutionary theories attempt to provide a historical analysis of the emotions, usually with a special interest in explaining why humans have emotions. Social theories explain emotions as the products of cultures and societies. The third category of theories describes the Process of emotions.

According to Wikipedia, one can distinguish between two different ways in which the evolutionary position has been developed. The first is based on the claim that emotions are the result of natural selection that occurred in early hominids. The second also claims that emotions are adaptations but suggests that the selection occurred much earlier. Robert Plutchik, a well-known evolutionist, claims that there are eight basic emotions, each one is an adaptation and all eight are found in all organisms. According to Plutchik, the emotions are similar to traits such as DNA or lungs in air- breathing animals—traits that are so important that they arose once and have been conserved ever since. In the case of the emotions, which he calls “basic adaptations needed by all organisms in the struggle for individual survival”, Plutchik suggests that the selection occurred in the Cambrian era, 600 million years ago. The eight adaptations of our emotions are incorporation, rejection, destruction, protection, reproduction, reintegration, orientation, and exploration as depicted by the following table: 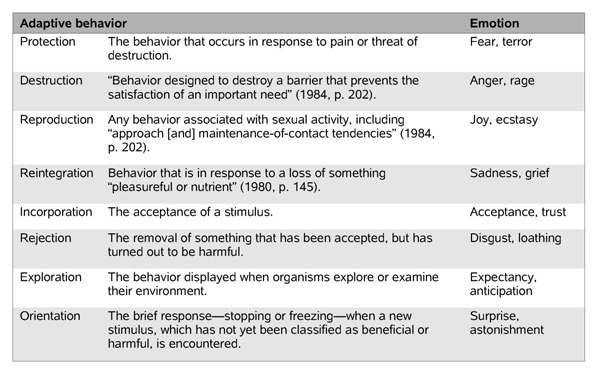 On the left are the behaviours that, according to Plutchik, are the result of natural selection, and on the right are the emotions associated with these behaviours.

The second main approach to explaining emotions begins with the idea that emotions are social constructions. That is, emotions are the products of societies and cultures, and are acquired or learned by individuals through experience. Virtually everyone who defends this position acknowledges that emotions are to some degree, natural phenomena. Nonetheless, the central claim made in these theories is that the social influence is so significant that emotions are best understood from this perspective. Emotions typically occur in social settings and during interpersonal transactions—many, if not most, emotions are caused by other people and social relationships. Thus, in many cases emotions may be best understood as interactions between people, rather than simply as one individual’s response to a particular stimulus. Emotions and their expression are regulated by social norms, values, and expectations. These norms and values influence what the appropriate objects of emotions are (that is, what events should make a person angry, happy, jealous, and so on), and they also influence how emotions should be expressed.

Theories about the Emotion Process

The emotion process begins with the perception of a stimulus, although in some cases the ‘stimulus’ may be internal; for example, a thought or a memory. The early part of the emotion process is the activity between the perception and the triggering of the emotion, while the later part of the emotion process is the bodily response: changes in heart rate, blood pressure, facial expression, skin conductivity, and so forth. William James (1884) was the first to develop a somatic feedback theory, which recently has been revived and expanded by the neuroscientist Antonio Damasio and the philosopher Jesse Prinz. Somatic feedback theories suggest that once the bodily response has been generated (that is, a change in heart rate, blood pressure, facial expression, and so forth), the mind registers these bodily activities and this mental state caused by the bodily response is the emotion. A consequence of this view is that without a bodily response there cannot be an emotion.

The hypothesis that every aspect of learning or any other feature of intelligence can be simulated by an intelligent machine carried the spirit of the Dartmouth Summer Research Project on Artificial Intelligence held in 1956. At that time, AI was seen as processing huge amounts of human intelligence, including language, vision and reasoning by an intelligent machine. AI was about designing thinking machines, but emotion was not up for consideration. However, some fields, such as Robotics, demanded some consideration of emotions in their integration and communication with their human users.

The question as to whether AI machines can have their own emotions, is open to debate. AI and neuroscience researchers agree that current forms of AI cannot have their own emotions. They have no body, no hormones and no emotional memory equivalent to that of a human being, with its construction starting in childhood, carrying on with the learning of life in adolescence and adulthood.

Artificial General Intelligence (AGI), the most recent AI concept, describes artificial intelligence as capable of carrying out many different tasks similar to humans. However, in 2019, there is still no operational AGI, and it will take many years or decades to reach this level of AI. On the other hand, breakthroughs have been achieved to design machines that can interpret our emotions (without having their own) or interacting with humans by simulating empathy. The detection of human emotions is a fairly mature field. It relies on various sensors: video, microphones and biometrics that monitor our behaviour. Once the emotions have been detected, it is possible to interpret them. Emotions depends on context and culture, just like language (voice and intonations) and gestures. Current AI can react to human emotions and it can display emotions by simulating them, but it cannot display real emotions.

Will artificial intelligence ever have emotions or feelings?

Today’s artificial intelligent systems do not have emotions. Human beings have emotions as a result of our own evolution. Based on his research, Charles Darwin concluded that the final objective of human emotions is to help the organism to survive and that the organism needs to survive because it is alive. Today’s application of AI does not require to feel emotions, nor does it seem that having emotions would help the system improve the execution of tasks. However, it is obvious that we could establish emotional connections with AI machines to enhance personalized education, for example. Furthermore, at some point we might require these links to be reciprocal, mirroring real inter-personal relationships.

Realistically we are far away from creating an algorithm that is capable of copying how human emotions are produced. The current standard is to use calibration stimuli (for example, several positive and negative images), and then to apply automatic machine-learning algorithms. These algorithms, such as artificial neural networks, search for correlations between the emotional responses measured in brain activity, for example with EEG or fMRI technology, and the classification of the images. Subsequently, a computer program develops a computational model of how this specific person’s brain or nervous system reacts to this specific stimulus (image), which causes a specific emotion (positive or negative). This model is utilised to find out the positive or negative emotional state when the person sees an image. But computational models are not the human brain, cannot replicate the human brain, and are far from doing so. Human emotions depend on our perception of the external world and of our inner self. We perceive the exterior world through our senses while the perception of the interior world depends on consciousness and cognition. In Antonio Damasio’s words:

“For artificial intelligence to have human emotions, we would not only have to recreate the human brain but also its senses, body and cognition”.

Contrasting Damasio’s statement with Minsky’s, one can conclude that AI can recognize and analyse emotions. As a result, AI can augment humans in analytical tasks where emotions are part of the application scenario. However, AI cannot replace humans unless we accept a passive state of our brains being hacked, serving the interests of ‘non-humans’ and criminals.