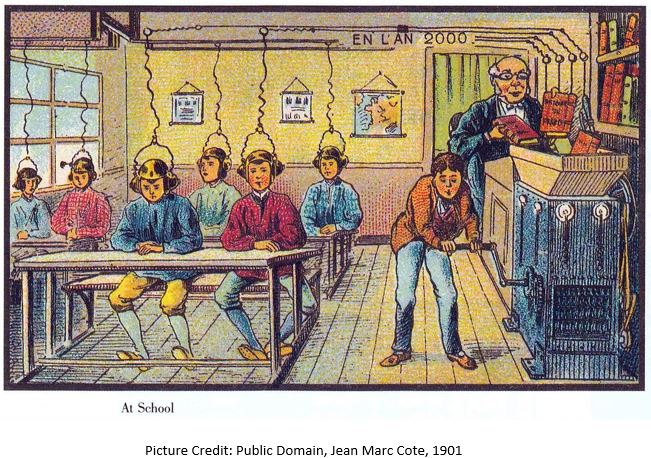 A paper published in June 2017 by the Future of Humanity Institute at Oxford University reports the results of a comprehensive survey of machine-learning researchers on their opinions concerning the progress in AI. The group surveyed predicted that AI would outperform humans in many domains within the next 40 years, such as translating languages (by 2024) or driving a truck (by 2027). According to the research, predictions varied widely by geographic region. For example, surveyed researchers from Asia predicted Singularity to arrive in 30 years, while North American researchers pegged it at 74 years. Looking at these figures today, it appears that the estimates for language translation and autonomous driving are too conservative and overstated by about five years. The exponential progress in language translation provokes the question if it still makes sense to learn a foreign language. Taking this thought a step further, we must raise the question, if our educational institutions are up to the task of adjusting their learning concepts to an environment where universal knowledge can be retrieved anywhere, anytime and how our human values can be brought in line with AI.

From the early days of science and philosophy, humans have wondered what makes us intelligent beings. Plato felt that a meaningful education should include instruction in music, gymnastics and dialectic and pondered on how we learned at all. ‘Psychology of Learning’, while still a new development, has been researched extensively in recent years. Jean Piaget is known for his theory of cognitive development which describes how children create a mental model of the world around them. His theory is important because it was one of the first theories that disagreed with the idea that intelligence was a steadfast trait. His theory sees cognitive development as something which takes place due to biological maturation and one’s interaction with the surrounding environment. Piaget’s theory has four stages. At the final stage – usually beginning at age 11 – individuals are able to logically use symbols related to abstract concepts, such as algebra and science. They can think about multiple variables in systematic ways, formulate hypotheses, and consider possibilities. They can also ponder abstract relationships and concepts such as justice.

The Taxonomy of Educational Objectives, known as Bloom’s Taxonomy, first published in 1956 and further refined over the past 70 years, is one of the most recognized learning theories to support formal education of adolescents from age 11 to 19. The Taxonomy comprises three learning domains: the cognitive, the affective and the psycho-motoric. The theory assigns to each of these domains a hierarchy which corresponds to different levels of learning. In other words, each level subsumes the levels that come before it. So, if we look at the cognitive domain for example, we can infer that before students can conduct an analysis, they first might need to know the methods of analysis, understand the different elements to review, and consider which method to apply. It is only then that they will be ready to conduct the analysis itself. The cognitive domain is focused on intellectual skills such as critical thinking, problem solving, and creating a knowledge base. The following graph illustrates the hierarchical concept:

The hierarchy extends from simple memorization designed to build the knowledge of learners, to creating something new based on previously-learned information. Learners are expected to progress linearly through the hierarchy, beginning at ‘remember’ and ending at ‘create’.

Although Piaget believed in lifelong intellectual development, he insisted that the formal education from age 11 to 19 represents the final stage of cognitive development and that continued intellectual development in adults depends on the accumulation of knowledge. It is important to note that Bloom’s Taxonomy is geared to classroom education, where typically 20-30 students are taught to achieve a common goal. This goal reflects the average level of the intellectual capacity of the class, possibly causing frustration with high- as well as low-performance learners.

Personalized learning provides the freedom to learn in one’s own time and learning at one’s own pace. With the introduction of MOOCs (Massive Open Online Courses) about six years ago, everybody has the chance to learn, under the provision that internet access is available. There is an abundance of courses, covering many areas of interest. Specialised education platforms such as Coursera, edX or Udacity compete for the best course offerings. Coursera, for example, claims to have about 150 university partners, offering 2000 courses to 24 million learners. While these courses are mostly oriented to support education at the adult level, education at the adolescent level requires more human guidance as personality development is intertwined with the subject being taught. Progress in human-machine interaction will soon provide AI-driven Avatar-Experts for personalized and individualized learning in a bi-directional manner whereby the Avatar senses the student’s emotional reactions and reacts with empathy. It might dawn on us that our current educational system for individuals age 11 to 19 is highly inefficient and needs a total overhaul, both in terms of the content to be taught as well as the educational concept applied. Considering the progress AI has gone though, applying massive parallel computation with deep learning algorithms, one can raise the question whether Bloom’s hierarchical educational concept still applies. From the ongoing progress in Neuroscience we know that the human brain is anything but a serial, hierarchical processor. In fact, it is one of the outstanding features of the human brain that it can deal with parallel events in a way AI so far has not achieved. This view is further supported by the fact that our learning capacity in respect to memory and cognition can be enhanced by brain training, taking advantage of the plasticity of the human brain. AI is good at solving very specific problems, but it still lacks the ability to transfer acquired knowledge to other domains. Consequently, formal education for adolescents should encompass the total width of human’s cognitive and emotional ability irrespective of the present limits of AI.

The three C’s for adolescent education

At a research-conference organized by the University of Zurich on Behavioural Economics three years ago, 2017 Nobel Laureate in Economics, Richard Thaler, emphatically stated:

A nerd is a person seen as overly intellectual, obsessive, introverted or lacking social skills. Typically, one meets nerds in professional settings where one-sided, isolated intellectual activities as typically applied in some scientific disciplines, count more than social skills. Adolescent education provides a last chance to counterbalance this one-sidedness and to prepare individuals to benefit from AI by fostering human values such as:

Values and ethical principles of a society are shaped by history, philosophy, art, language or literature in combination with progress in science and technology. The study of humanities empowers individuals to develop skills that allow us to empathize with other human beings and let us have a more global and pluralistic view of the problems we have to face both in our lives and at work. The study of science and technology provides the means to solve these problems. Hence, education at the adolescent level has to incorporate both domains; the study of science as well as humanities.

Seeking to respond to the growing need for professionals with a technical background, governments tend to encourage a concentrated educational effort on subjects known as STEM: Science, Technology, Engineering and Mathematics. What are at stake are the demands of an increasingly technological society in which the development of robotics, biotechnology, computing and big data are vital to remaining competitive within the framework of our free, capitalistic society. However, an education where literature, art, philosophy, history, social sciences, etc. have a secondary role, fuels the risk of cultural loss and fosters training of individuals that lack vision and critical thinking. Adolescence is the time to foster human values, combining science and humanities as part of an educational setting. Short-cutting the life- and personality-forming part of adolescence could backfire in the long run. Humanity has the unique chance to replace the inefficiency of hierarchical learning concepts, as stipulated by Bloom’s taxonomy, with an AI supported, individualized concept, combining the study of science and humanities. To summarize: AI can be applied to support the education of humans to manage the potential benefits of AI in the future.